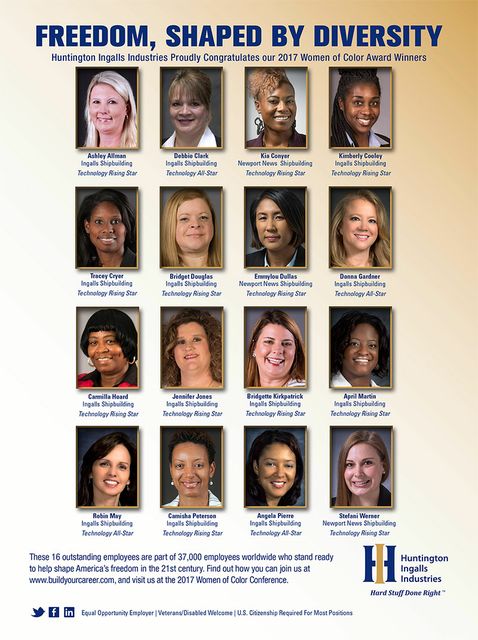 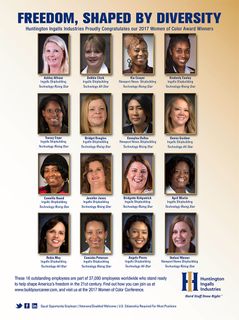 Huntington Ingalls Industries Proudly Congratulates our 2017 Women of Color Award Winners.These 16 outstanding employees are part of 37,000 employees worldwide who stand readyto help shape America’s freedom in the 21st century. Find out how you can join us at

“The annual Women of Color STEM Conference is an opportunity to celebrate the women of HII whose deep dedication helps keep America and our allies safe,” said Bill Ermatinger, HII’s corporate vice president and chief human resources officer. “It also gives us a chance to acknowledge the importance of STEM careers to our business and the industry as a whole. HII is proud of the 16 bright minds who are representing us this year.”

HII was among the corporate sponsors that supported this year’s event, which was held last week in Detroit.

Four HII employees received Technology All-Star awards, which recognize accomplished women of color from mid-level to advanced stages of their careers who have demonstrated excellence in the workplace and in their communities. They are:

Twelve HII employees received Technology Rising Star awards that recognize women who are helping to shape future technology. They are: 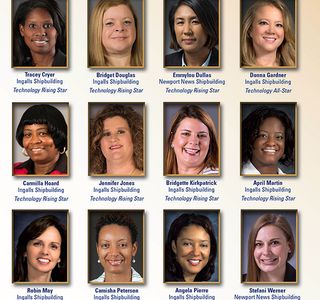 These 16 outstanding employees are part of 37,000 employees worldwide who stand ready
to help shape America’s freedom in the 21st century. Find out how you can join us at
www.buildyourcareer.com, and visit us at the 2017 Women of Color Conference.