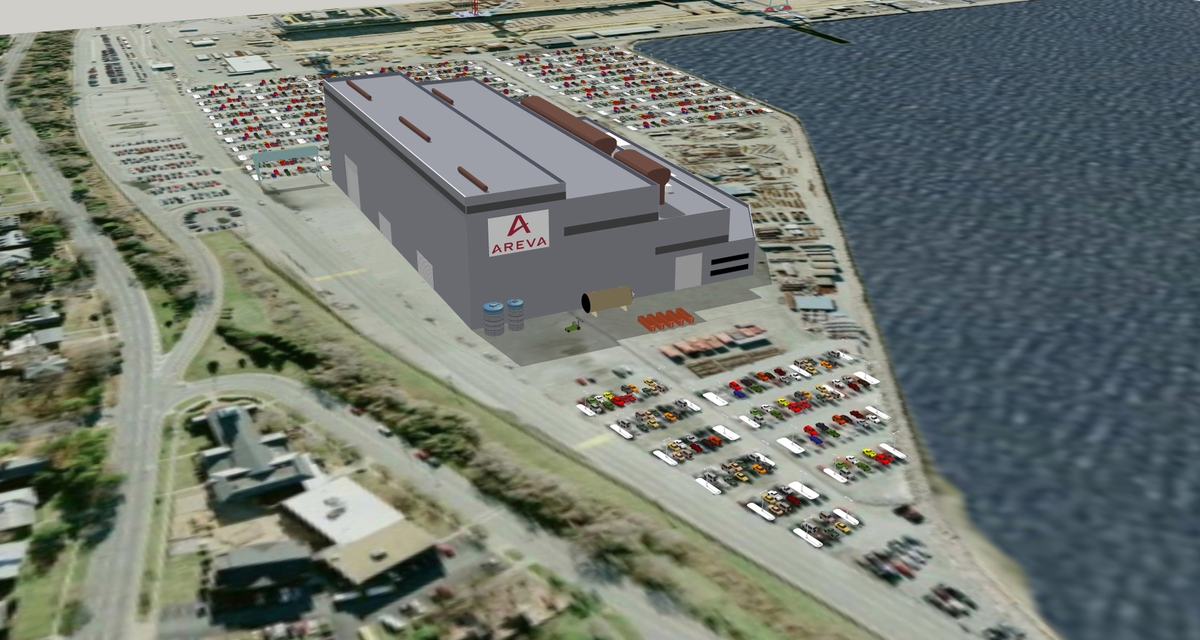 The 300,000 square-foot facility represents a significant investment of more than $360 million in the U.S. commercial nuclear and manufacturing industries and will bring more than 500 skilled hourly and salaried jobs to the Commonwealth of Virginia. AREVA Newport News will be the first full-scale manufacturing facility dedicated to supply heavy components, such as reactor vessels, steam generators and pressurizers to the U.S. nuclear energy industry. These components will supply the first new U.S. nuclear power plants to be built in 35 years. Industry experts have viewed limited production of heavy components positioned against rising demand as a constraint on nuclear energy's expansion.

"AREVA Newport News is powerful evidence of the reality of the U.S. nuclear energy resurgence and our commitment to it," said AREVA CEO Anne Lauvergeon. "AREVA intends to build one-third of all new reactors around the world and at least seven in the United States. AREVA Newport News is a key step in our dual strategy to increase domestic content in the new nuclear power plants we build and to produce in the local currency. Together with our Chalon/St. Marcel plant in France, AREVA strengthens its capabilities to supply the global energy renaissance."

AREVA has been manufacturing quality heavy components for the global commercial nuclear industry for more than 30 years at its Chalon/St. Marcel plant. Together with Northrop Grumman's experience, AREVA Newport News will provide a secure domestic link in the supply chain for deploying the U.S. EPR and supporting a diverse energy mix that will mean safe, clean, affordable electricity for Americans.

"This relationship capitalizes on Northrop Grumman Shipbuilding's century-long history of quality craftsmanship, skilled engineering and program management expertise building large nuclear and non-nuclear ships for the U.S. Navy," said Mike Petters, corporate vice president and president of Northrop Grumman Shipbuilding. "Our shipbuilders embrace the opportunity to apply their considerable skills and training to a growing U.S. energy sector, backed by the pro-growth environment of the Commonwealth of Virginia, employing the same dedication and commitment to domestic energy security that has been applied to national security."

Northrop Grumman's Shipbuilding sector brings its heavy industrial engineering and manufacturing expertise and the culture of excellence required to build U.S. Navy nuclear ships to the venture. Along with its skilled workforce, Northrop Grumman has existing transportation access via the James River to deliver heavy components.

"The nuclear power industry is bringing back 'made in America'," said Tom Christopher, CEO of AREVA Inc., the group's North American division. "In addition to our joint venture with Northrop Grumman, we are working with Lehigh Heavy Forge in Bethlehem, Pa., to produce qualified forgings for the U.S. EPR, further strengthening the U.S. manufacturing sector. Each new Generation III+ nuclear power plant in the United States will create thousands of jobs and many more will be generated as industries gear up to supply the materials and components."

"This agreement is the result of several years of effort by both the AREVA and Northrop Grumman teams," said Dan Arczynski, vice president for strategy for Northrop Grumman Shipbuilding. "The relationship that has formed between our great companies is grounded in similar cultures of heavy manufacturing excellence. This new venture will be good for both of our companies, the Commonwealth of Virginia and City of Newport News, and the future of manufacturing in America."

As the leading U.S. nuclear vendor and a key player in the electricity transmission and distribution sector, AREVA Inc.'s 5,300 U.S. energy employees are committed to serving the nation and paving the way for the future of the electricity market. With 45 locations across the nation and nearly $2 billion in energy revenues in 2007, AREVA Inc., through its subsidiaries, combines U.S. leadership, access to worldwide expertise and a proven track record of performance. In the United States and in more than 100 countries around the world, AREVA is engaged in the 21st century's greatest challenges: making energy available to all, protecting the planet, and acting responsibly toward future generations. AREVA Inc. is headquartered in Bethesda, Maryland. 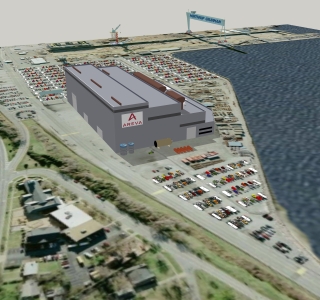 An artist's rendition of the AREVA Newport News facility

An artist's rendition of the AREVA Newport News facility, which will be located next to Northrop Grumman Shipbuilding in Newport News, Va. Construction is expected to begin early next year