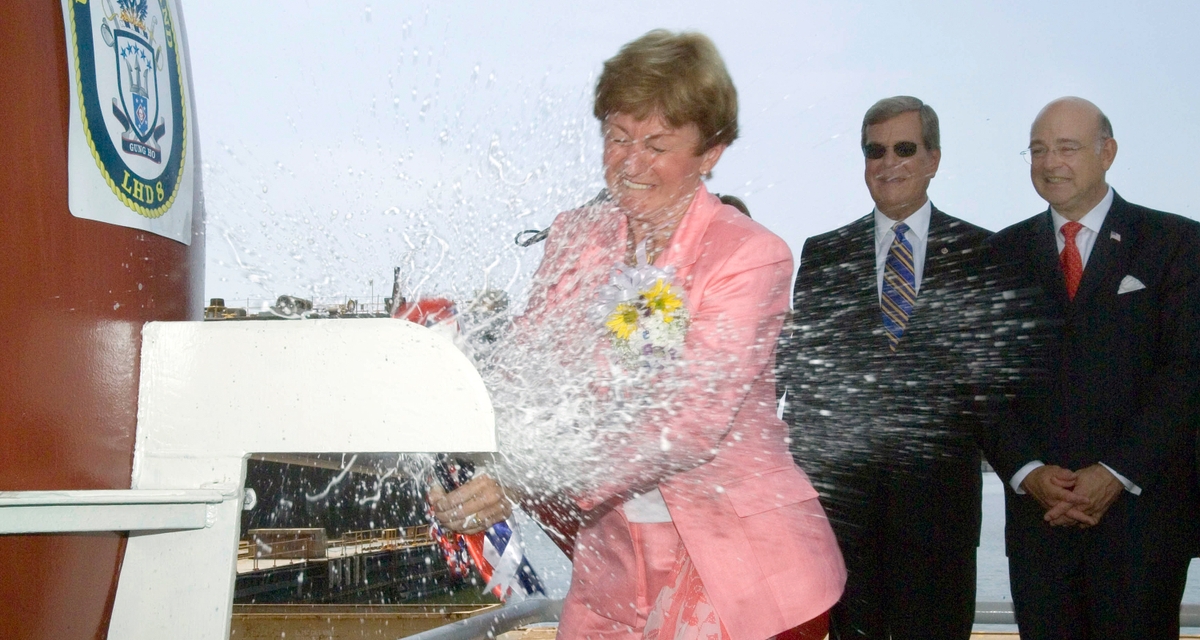 With a confident and spirited swing, Hagee, wife of U.S. Marine Corps commandant Gen. Michael Hagee, capped a ceremony that honored some of America's most heroic Marines and also signified a major milestone in the recovery of Northrop Grumman Corporation's Pascagoula facility, which today hosted its first ship christening since the devastation of Hurricane Katrina.

A photo accompanying this news release is available at http://media.primezone.com/noc/

Sen. Trent Lott, R-Miss., honored the ship, the ship's sponsor and the Northrop Grumman shipbuilders' resiliency they displayed throughout the construction of this ship.

"This ship has it all and it will carry America's spirit along with Silke Hagee's spirit all over the world for years to come," Lott said. "I'm proud of this ship, but more important, I'm proud of what this ship symbolizes. During Hurricane Katrina, the people who stayed here in the shipyard put their lives at risk, just like the Marines and sailors do. The workers did their job and this ship has already survived a tremendous attack. I am proud of the men and women who labor in this shipyard. They rose to occasion."

The name Makin Island honors the daring raid carried out by Marine Corps Companies A and B, Second Raider Battalion, on the Japanese-held island on Aug. 17-18, 1942. Marine Corps Lt. Col. Evans Carlson, the raid's leader, was awarded the Navy Cross for his actions, while Marine Corps Sgt. Clyde Thomason was awarded the Congressional Medal of Honor, the first enlisted Marine to be so honored during World War II.

"Today's christening of this magnificent ship reminds us of the role the U.S. Navy and Marine Corps plays in today's world," said secretary of the Navy Donald C. Winter. "As a freedom-loving nation, America depends on military forces that are capable of defending threats to freedom, wherever they may gather. Makin Island incorporates a number of enhanced capabilities to ensure that we can continue to guarantee maritime supremacy whenever and wherever required."

"The ship we christen today is 45,000 tons of cold steel covered in gray paint, and yet she is beautiful," said Dr. Sugar. "She's well proportioned, striking in presence, and inspirational in her purpose. I want to thank the shipbuilders here today. Northrop Grumman's 120,000 employees are proud to serve you who serve our nation."

Philip A. Teel, president of Northrop Grumman Ship Systems, honored the courage and ingenuity of the Raiders saying it inspired the shipbuilders in continuing to seek innovative successes in the face of recent adversities. Eight members of the Marine Corps Raider Battalion in World War II were in attendance.

"The Raiders symbolized the willingness to sacrifice everything for the greater good, what has come to be known as the Spirit of Gung Ho," said Philip Teel, president, Northrop Grumman Ship Systems. "And I humbly submit that we seek to honor the legacy of these great Americans through the proud efforts of another group of proud Americans -- those people who build ships. They too are not strangers to adversity. It's been almost a year since we were dealt a devastating blow with the largest natural disaster in American history. But we are bouncing back and thoughtfully and aggressively setting a new course for shipbuilding excellence."

Makin Island (LHD 8) is the eighth and final ship in the USS Wasp (LHD 1) Class, but is the first of the large deck amphibious assault ship class to be built with gas turbine engines and electric drive. Over the life of the ship, this design will provide significant savings in manpower and maintenance costs associated with traditional steam-powered amphibious ships.

Capt. Robert G. Kopas, U.S. Navy, born in Cleveland, raised in Phoenix, and a graduate of Purdue University, is the ship's commanding officer. The ship has living areas for nearly 3,200 sailors and Marines. Makin Island will be homeported in San Diego, Calif.

The Makin Island is 844 feet long and 106 feet wide and weighs 42,800 tons. Its 70,000 horsepower hybrid propulsion system will drive it to speeds in excess of 20 knots. As a multi-purpose amphibious assault ship, it is designed to transport and land a Marine Expeditionary Unit, a force of almost 2,000 Marines, ashore by helicopter, landing craft and amphibious assault vehicle. It will also have secondary missions of sea control and power projection by helicopter and fixed-wing vertical short take-off and landing aircraft; command and control; and mission support, including a hospital with six operating rooms. 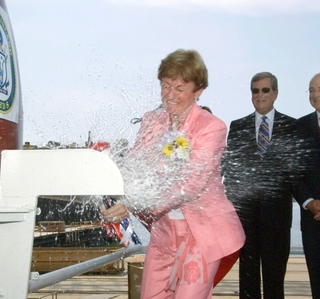 Mrs. Silke B. Hagee, wife of U.S. Marine Corps Commandant Gen. Michael W. Hagee, and sponsor of Makin Island (LHD 8), smashes a champagne bottle against the bow of the Wasp-class amphibious assault ship, christening her for future service in the U.S. Navy, with support from U.S. Sen. Trent Lott, left, and Ronald Sugar, Northrop Grumman chairman and chief executive officer. The vessel is named to honor the daring raid by the Second Marine Raider Battalion against Japanese-held Makin Island 64 years ago.