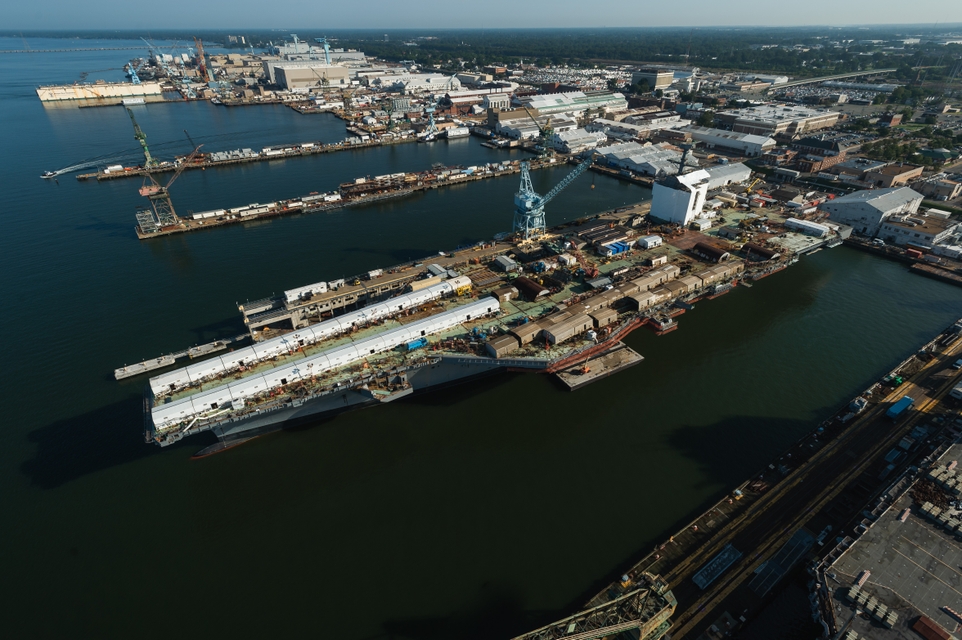 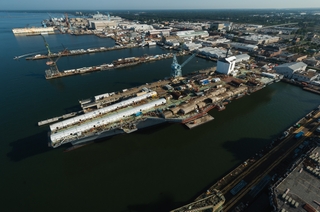 In this aerial photograph, the aircraft carrier John F. Kennedy (CVN 79) sits at Pier 3 at Newport News Shipbuilding division. The ship is approximately 76 percent complete and is progressing through final outfitting and testing. Photo by Matt Hildreth/HII

The contract action announced today revises the two-phased delivery approach originally planned for the second ship in the Gerald R. Ford-class of carriers. It comes as a result of extensive collaboration with the Navy to support legislative requirements for Kennedy to be delivered with its complete warfare system, including F-35 Joint Strike Fighter capabilities, before the ship is commissioned into the fleet.

The contract action has a potential total value of up to $315 million, provides initial funding for the procurement of long-lead material and planning, and is expected to be definitized next year.

“We are pleased to have worked with the Navy to adopt lessons learned in the construction of USS Gerald R. Ford (CVN 78) to improve cost, production and planning efficiencies on Kennedy,” said Lucas Hicks, Newport News’ vice president of new construction aircraft carrier programs. “We believe that the single-phase approach ensures the most effective build plan for all remaining work and provides the best value for the Navy by supporting its ability to accelerate operational deployment of this maritime force asset.”

Kennedy is approximately 76% complete. The ship was launched in December 2019, and currently is undergoing additional outfitting and testing at the company’s Newport News Shipbuilding division. The ship is scheduled to be delivered to the Navy in 2024.

Statements in this release, other than statements of historical fact, constitute “forward-looking statements” within the meaning of the Private Securities Litigation Reform Act of 1995. Forward-looking statements involve risks and uncertainties that could cause our actual results to differ materially from those expressed in these statements. Factors that may cause such differences include: changes in government and customer priorities and requirements (including government budgetary constraints, shifts in defense spending, and changes in customer short-range and long-range plans); our ability to estimate our future contract costs and perform our contracts effectively; changes in procurement processes and government regulations and our ability to comply with such requirements; our ability to deliver our products and services at an affordable life cycle cost and compete within our markets; natural and environmental disasters and political instability; our ability to execute our strategic plan, including with respect to share repurchases, dividends, capital expenditures and strategic acquisitions; adverse economic conditions in the United States and globally; health epidemics, pandemics and similar outbreaks, including the COVID-19 pandemic; changes in key estimates and assumptions regarding our pension and retiree health care costs; security threats, including cyber security threats, and related disruptions; and other risk factors discussed in our filings with the U.S. Securities and Exchange Commission. There may be other risks and uncertainties that we are unable to predict at this time or that we currently do not expect to have a material adverse effect on our business, and we undertake no obligation to update any forward-looking statements. You should not place undue reliance on any forward-looking statements that we may make. This release also contains non-GAAP financial measures and includes a GAAP reconciliation of these financial measures. Non-GAAP financial measures should not be construed as being more important than comparable GAAP measures. 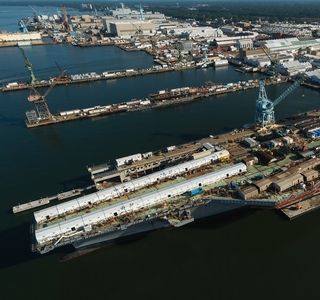 In this aerial photograph, the aircraft carrier John F. Kennedy (CVN 79) sits at Pier 3 at Newport News Shipbuilding division. The ship is approximately 76 percent complete and is progressing through final outfitting and testing. Photo by Matt Hildreth/HII