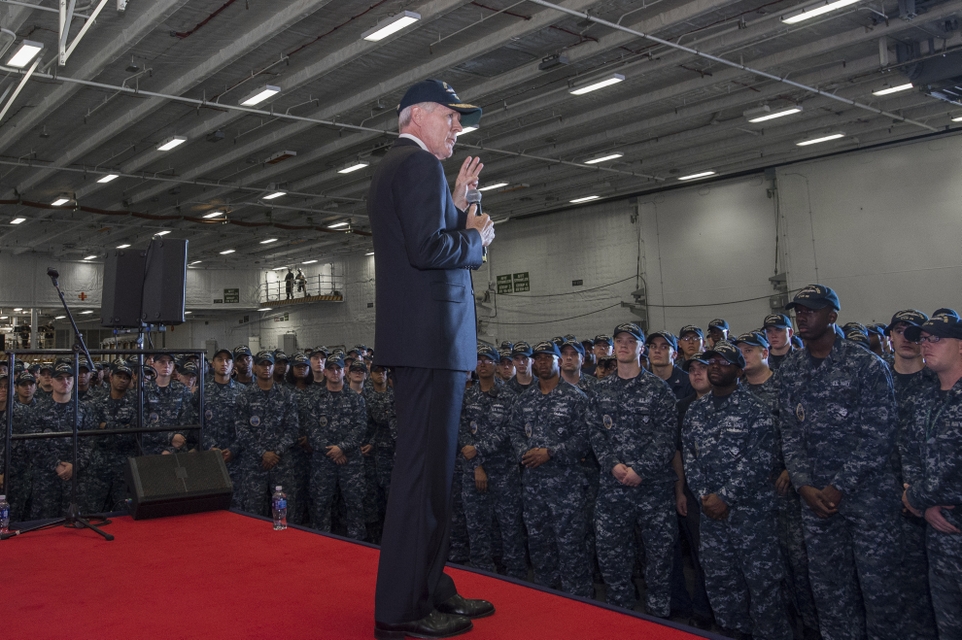 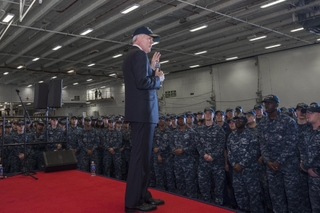 Secretary of the Navy Ray Mabus met with more than 1,000 shipbuilders and sailors to thank them for their hard work on the construction and testing of the aircraft carrier Gerald R. Ford (CVN 78). Photo by John Whalen.

Mabus also discussed Navy and Marine Corps accomplishments over the past seven years, including the Navy’s work in innovation, energy, shipbuilding, personnel initiatives and partnerships.

“What the Navy gives America is presence—not at the right place at the right time, but all the time,” Mabus said. “Quantity is a quality all its own. These shipbuilders produce great American ships. With aircraft carriers, we get on station faster, stay there longer, and we bring everything we need.”

“Secretary Mabus’ encouraging words mean a lot to these men and women who have worked hard to bring Gerald R. Ford to life,” Mulherin said. “Like all lead ships of a new class, Ford has come with its challenges. The shipbuilders and Ford crew have tackled each challenge together and without hesitation. I’m very proud of their perseverance, and I’m honored to be a part of building this great ship.”

Mabus is the 75th Secretary of the Navy and a former Navy officer, having served aboard the cruiser USS Little Rock (CLG 4). During his tenure, Mabus has worked to improve the quality of life of sailors, Marines and their families; decrease dependence on fossil fuels; strengthen industry and international partnerships; and increase the size of the Navy fleet.

“Under the secretary’s leadership, greater priority has been placed on shipbuilding contracts, which helps us maximize learning curve efficiencies in ship construction and provides stability to our industrial base,” Mulherin said. “We value Secretary Mabus’ unwavering support and greatly appreciate his time with us today.” 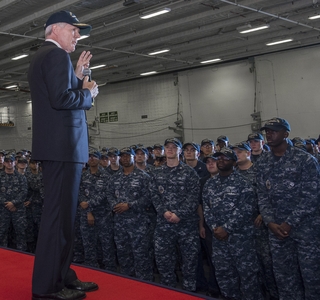 Secretary of the Navy Ray Mabus met with more than 1,000 shipbuilders and sailors to thank them for their hard work on the construction and testing of the aircraft carrier Gerald R. Ford (CVN 78). Photo by John Whalen.