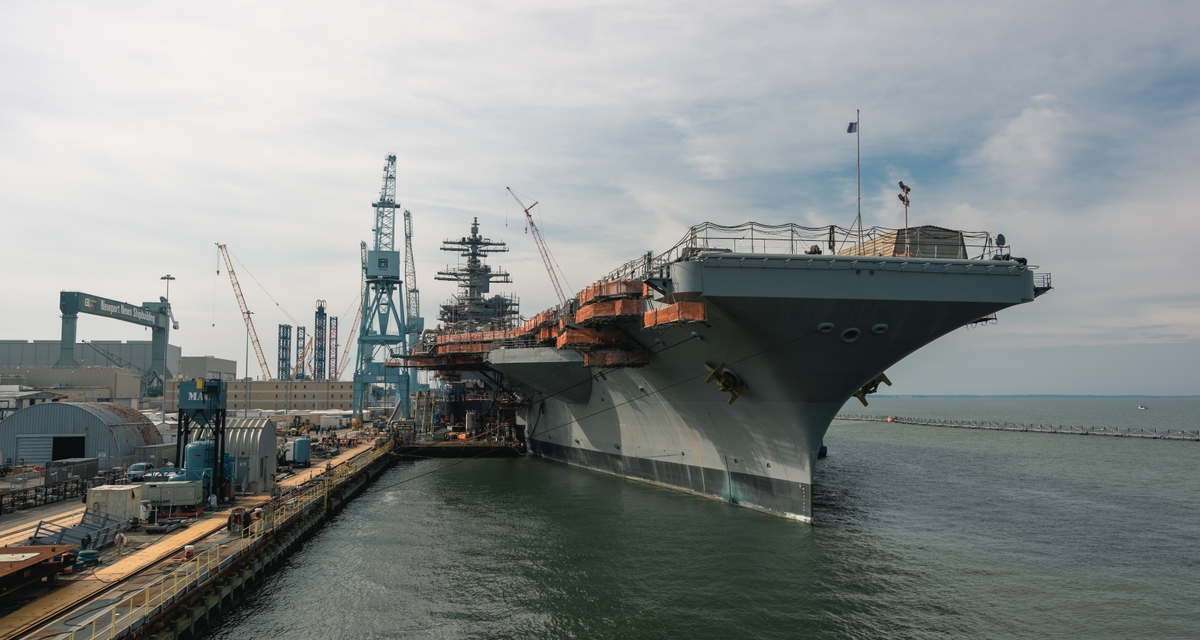 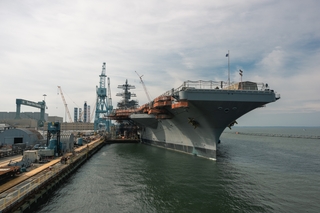 The refueling and complex overhaul (RCOH) of USS George Washington (CVN 73) is continuing to progress through its final outfitting and test phase at Newport News Shipbuilding division, and is approximately 80% complete. Photo by Matt Hildreth/HII

The re-introduction of steam to the ship's steam-driven components marks a significant milestone in the ship’s propulsion plant components and systems coming back to life. Achieving this event encompasses work being performed on thousands of steam components by NNS and our contracted overhaul facilities, along with the ship’s reactor department. Work is comprised of equipment and system removals, refurbishments, replacements, alignments and pre-steam testing. The effort began in 2017 when George Washington arrived at Newport News over three years ago with work continuing today. The test program is designed to exercise all aspect of the propulsion plant systems and will certify the systems and components for future operations over the next 25 years of service.

In parallel with commencing the steam test program, modifications and repairs to the potable water system is yet another milestone the project team recently achieved. The overhaul and recertification of the potable water system is a major undertaking and a significant step in the successful completion of the availability. This system, which runs through and services hundreds of spaces on the ship, is key to bringing the crew back onboard later this year. Work on the potable water system, which includes 26 tanks, pumps, valves and thousands of feet of pipe commenced early in the availability. During the process, the tanks were refurbished, the system reconfigured, the piping pressure tested and the water chlorinated and tested to ensure it is safe for the crew to use and drink.

“These milestones are significant events in the life of the program; there is a lot of hard work that goes into getting to this point in the RCOH where we have steam flowing into the propulsion plant and clean drinking water flowing through the ship’s potable water system,” said Todd West, CVN 73 program director for Newport News. “These milestones bring us a step closer to the completion of the RCOH.”

George Washington is progressing through its final outfitting and test phase and is approximately 80% complete. George Washington is the sixth Nimitz-class aircraft to undergo its mid-life refueling overhaul and maintenance availability that produces a recapitalized carrier capable of supporting current and future warfare doctrine for the next 25 years. The ship is on track to redeliver in 2022. 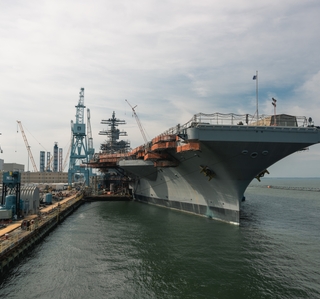 The refueling and complex overhaul (RCOH) of USS George Washington (CVN 73) is continuing to progress through its final outfitting and test phase at Newport News Shipbuilding division, and is approximately 80% complete. Photo by Matt Hildreth/HII