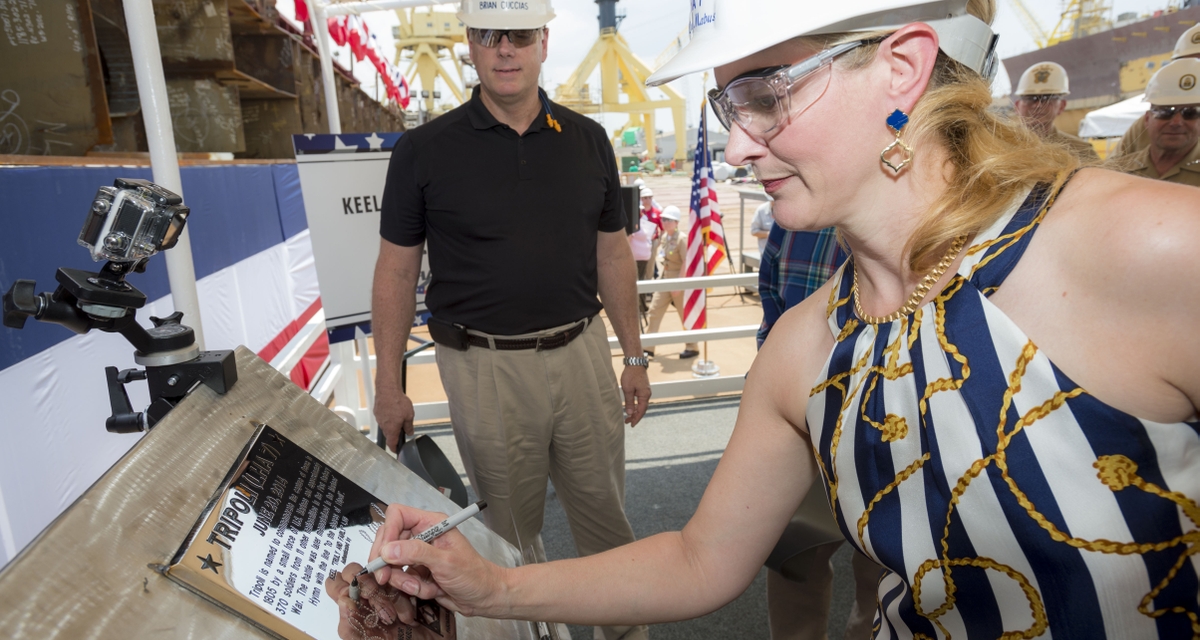 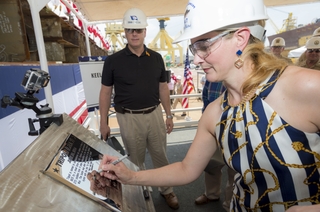 Lynne Mabus, wife of Secretary of the Navy Ray Mabus and sponsor of the amphibious assault ship Tripoli (LHA 7), signs her initials onto the ship’s keel plate this morning at HII’s Ingalls Shipbuilding division in Pascagoula, Miss. She then certified that the keel had been “truly and fairly laid.” Also pictured is Ingalls Shipbuilding President Brian Cuccias. Photo by Lance Davis

PASCAGOULA, Miss., June 20, 2014 (GLOBE NEWSWIRE) -- Huntington Ingalls Industries (NYSE:HII) authenticated the keel today for the future multipurpose amphibious assault ship USS Tripoli (LHA 7). The warship is under construction at the company's Ingalls Shipbuilding division and was officially authenticated by its sponsor, Lynne Mabus, wife of U.S. Navy Secretary Ray Mabus, and Steve Senk, an HII employee who was awarded the Silver Star for his actions to save the second USS Tripoli (LPH 10) after the ship struck a mine during Operation Desert Storm.

Secretary Mabus paid tribute to the Ingalls shipbuilders during his remarks. "Today, we have 100 ships forward-deployed around the world," he said. "They're out there standing the watch, protecting this country. They're a long way from home. They're there because of the great work of the shipbuilders here at Huntington Ingalls. They're there because you are building the most technologically advanced platforms in the world, and you are building them for the defense of this country. We couldn't put the fleet to sea—we wouldn't have a fleet—without the dedicated men and women who work here."

Gov. Phil Bryant also attended the ceremony and had similar praise for the Ingalls workforce. "You are building the most technologically advanced warships on the planet right here in Pascagoula, Mississippi," he said. "Those of you who stand here today with the hardhats on are making sure that our warfighters now and for generations to come will have the ships they need to defend liberty around the world. There is no better work. God has blessed you with the talent and the ability to do this. Let us not take it for granted. Let us always remember that what you do here today will save lives and defend liberty."

The future USS Tripoli and the future USS America (LHA 6) are the first two ships in a new class of amphibious assault ships for the U.S. Navy. The ship will be 844 feet long and 106 feet wide and will displace 44,971 long tons.

"We have been building large-deck amphibious assault ships here at Ingalls for more than 48 years," said Ingalls Shipbuilding President Brian Cuccias. "Our facility is uniquely structured and our shipbuilders are uniquely qualified to continue building these great ships. LHAs are the most complex conventionally powered Navy warships that are built, and we are excited about delivering Tripoli for our customer and our nation."

The fuel-efficient gas turbine propulsion system will drive the ship in excess of 20 knots. The warship will accommodate a crew of 1,204 (with 102 officers) and 1,871 troops. Tripoli will be capable of carrying a Marine Expeditionary Unit, including Marine helicopters, MV‐22 Osprey VTOL tiltrotor aircraft and F‐35B Joint Strike Fighters (JSF) STOVL aircraft.

At the culmination of the ceremony, Mrs. Mabus signified that the keel of Tripoli had been "truly and fairly laid." Ingalls welder George Powe then welded her initials, along with HII employee Steve Senk's, onto a ceremonial keel plate that will remain with the ship. Senk, who works at the company's Continental Maritime subsidiary in San Diego, served as a lieutenant commander on the USS Tripoli, an amphibious assault ship also built at Ingalls.

"It was in this shipyard where my grandparents worked, and my grandmother was even a real-life 'Rosie the Riveter,'" Mrs. Mabus said. "We have a family photo of her standing in a pair of trousers with a bandana on her head just like in the poster. The money from these jobs enabled my mother to grow up. And as a child growing up in Jackson, Mississippi, I spent many summers here in Pascagoula, near the water, the shrimp boats and the skyline of the shipyard. They are still such a vivid part of my memory."

Like the lead ship in the class, America, Tripoli is designed for survivability with increased aviation capacity, including an enlarged hangar deck, realignment and expansion of the aviation maintenance facilities, a significant increase in available stowage for parts and support equipment, and increased aviation fuel capacity. Similar to its predecessors, the ship will be able to operate as the flagship for an expeditionary strike group. Ingalls has built five Tarawa-class (LHA 1) ships and eight Wasp-class (LHD 1) ships. The first of the America class was recently delivered and will be commissioned on Oct. 11 in San Francisco.

Tripoli will be the third ship to bear the name commemorating the capture of Derna, Libya, in 1805 by a small force of U.S. Marines and approximately 370 soldiers from 11 other nationalities. The battle, later memorialized in the Marines' Hymn with the line "to the shores of Tripoli" brought about a successful conclusion to the combined operations of the First Barbary War.

Huntington Ingalls Industries (HII) designs, builds and maintains nuclear and non-nuclear ships for the U.S. Navy and Coast Guard and provides after-market services for military ships around the globe. For more than a century, HII has built more ships in more ship classes than any other U.S. naval shipbuilder at its Newport News Shipbuilding and Ingalls Shipbuilding divisions. Employing more than 39,000 in Virginia, Mississippi, Louisiana and California, HII also provides a wide variety of products and services to the commercial energy industry and other government customers, including the Department of Energy. For more information, visit: 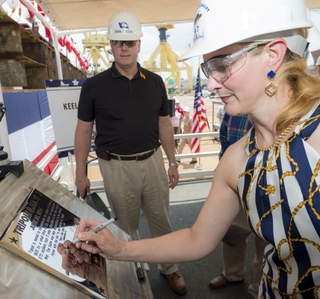 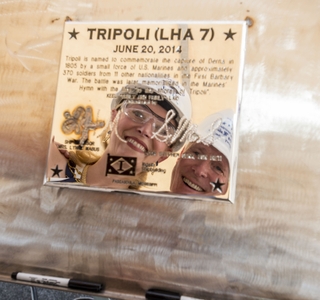 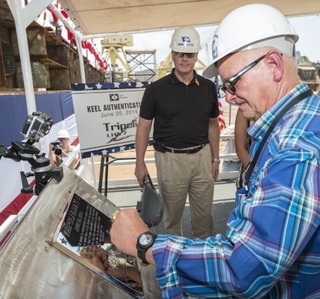 Lynne Mabus, wife of Secretary of the Navy Ray Mabus and sponsor of the amphibious assault ship Tripoli (LHA 7), signs her initials onto the ship’s keel plate this morning at HII’s Ingalls Shipbuilding division in Pascagoula, Miss. She then certified that the keel had been “truly and fairly laid.” Also pictured is Ingalls Shipbuilding President Brian Cuccias. Photo by Lance Davis.

Lynne Mabus, sponsor of the Tripoli (LHA 7) and her husband, Secretary of the Navy Ray Mabus, are reflected in the ship’s keel plate following the keel authentication ceremony at Ingalls Shipbuilding in Pascagoula, Miss. Photo by Lance Davis.

Steve Senk is an HII employee who was awarded the Silver Star for his actions to save the second USS Tripoli (LPH 10) after the ship struck a mine during Operation Desert Storm. Photo by Lance Davis