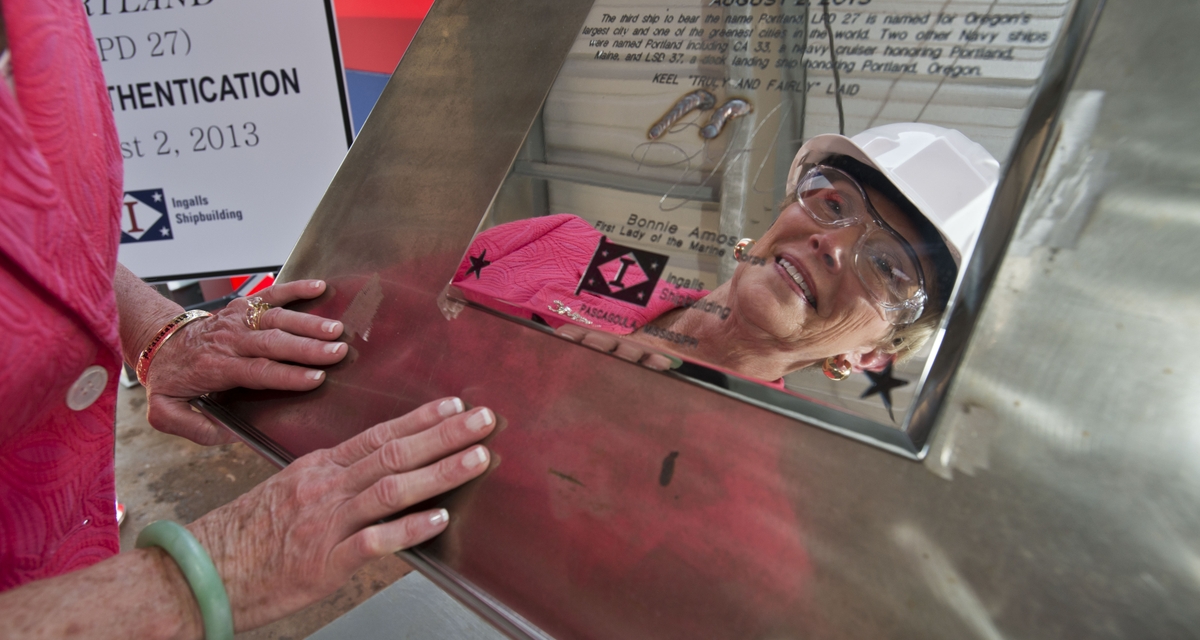 U.S. Marine Corps Gen. James Amos, commandant of the U.S. Marine Corps and principal speaker for the ceremony, noted the first-in-class USS San Antonio (LPD 17) was presently off the coast of Yemen alongside another Ingalls-built ship, USS Kearsarge (LHD 3). 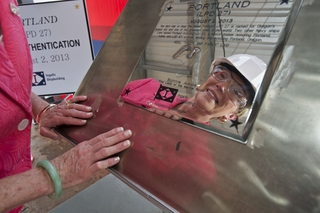 Mrs. Bonnie Amos, wife of U.S. Marine Corps Gen. James Amos, Commandant of the Marine Corps and ship sponsor of Portland (LPD 27), looks at the ceremonial keel plate with her initials that will remain with LPD 27 during the ship's entire Naval service. Photo by Lance Davis

"That lead ship of this great warship class, with its Marines, is serving the Navy and our nation very proudly today," Gen. Amos said. "It's in harm's way as we speak. Realizing that Portland is scheduled to be the last ship in this class, nothing would warm my heart more and nothing would make me work harder than to continue to build this class of ship."

"We build ships for the greatest Navy and greatest Marine Corps that has ever been," said Ingalls Shipbuilding President Irwin F. Edenzon. "We are proud of the tradition here at Ingalls shipbuilding. Mrs. Amos, we know that you share our pride in the workmanship and craftsmanship of all of the shipbuilders who are building your ship."

Bonnie Amos, wife of Gen. Amos, commandant of the Marine Corps, is the ship's sponsor. She authenticated the keel of LPD 27 saying it had been "truly and fairly laid." Her name was welded onto a steel plate by Ingalls welder Marty Peterson.

During her remarks, Mrs. Amos told the Ingalls shipbuilders, "I've been told the sponsor of a ship instills her own unique spirit into the heart of each warship. I take that responsibility very seriously and will be thinking and praying for each one of you every day as you bring this ship to completion. Today marks the beginning of my commitment to support this ship, my commitment to the workers who will bring her to life and my commitment to the men and women who wear the cloth of our nation who will man her decks."

Ingalls Shipbuilding is building the entire LPD 17 San Antonio Class of ships, the newest addition to the Navy's 21st century amphibious assault force. To date, eight ships have been delivered to the Navy. The 684-foot-long, 105-foot-wide ships are used to transport and land Marines, their equipment and supplies ashore via embarked air cushion or conventional landing craft and amphibious assault vehicles, augmented by helicopters or vertical takeoff and landing aircraft such as the Osprey. The ships will continue to support amphibious assault, special operations, or expeditionary warfare and humanitarian missions throughout the first half of the century.

In addition to more than 10,000 Ingalls shipbuilders, there are 650 suppliers from 38 states which support the LPD 17 program. Ingalls spends approximately $175 million a year with this vital industrial base. 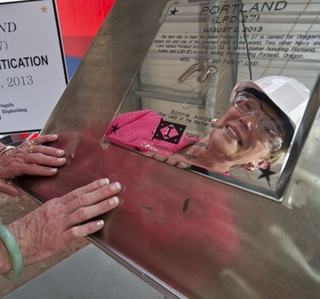 Mrs. Bonnie Amos, wife of U.S. Marine Corps Gen. James Amos, Commandant of the Marine Corps and ship sponsor of Portland (LPD 27), looks at the ceremonial keel plate with her initials that will remain with LPD 27 during the ship's entire Naval service. Photo by Lance Davis