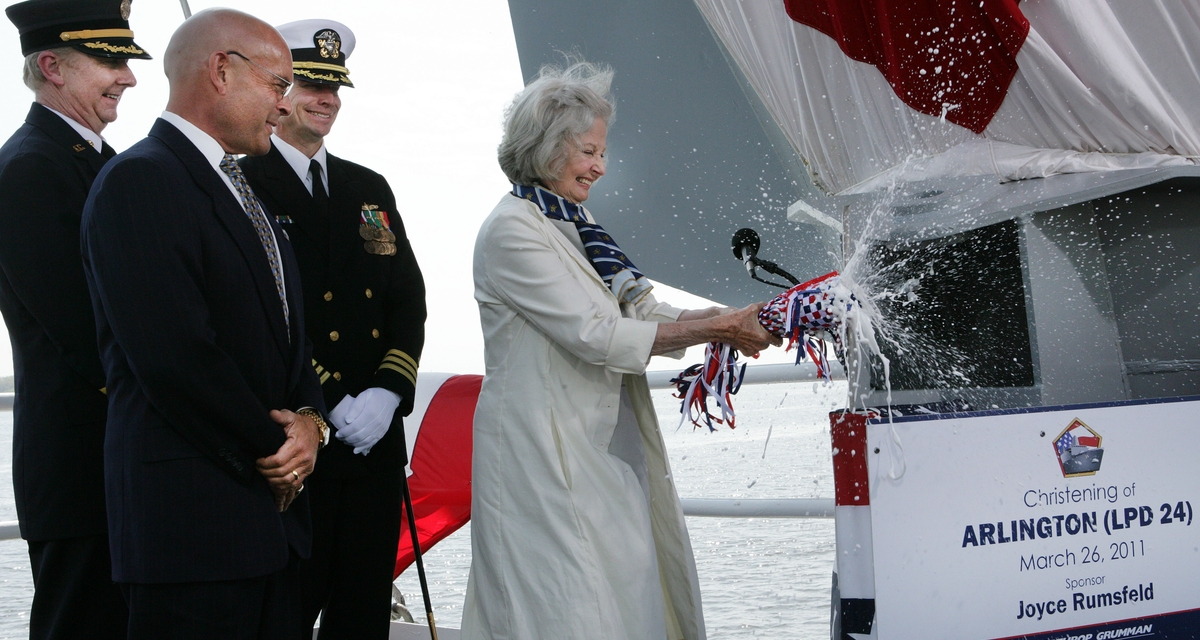 A photo accompanying this release is available at: http://media.globenewswire.com/hii/mediagallery.html?pkgid=8938

Arlington County, Va., Fire Chief James Schwartz, who was Deputy Fire Chief and Incident Commander on 9/11 at the Pentagon coordinating the rescue response efforts on the ground, delivered emotional comments as principal speaker.

"In its remembrance, 9/11 taught us that life is precious; so too is the American way of life," said Chief Schwartz. "Today, we christen a Navy vessel whose chief responsibility is to preserve that way of life and to enable us as Americans to pursue our hopes and dreams in freedom. This way of life is only possible because of the sacrifice of men and women in uniform who protect our nation here and around the world.

"The nation mourns each year on the anniversary of Sept. 11, 2001, but those who lost a spouse, a parent, a child or a sibling are reminded each and every day," he continued. "We have a responsibility to remember their lives and to never forget their loss."

The ship is named for the city of Arlington, Va., honoring the 184 victims in the air and on the ground who lost their lives when American Airlines Flight 77 crashed into the Pentagon on Sept. 11, 2001. The ship also honors the military and civilian employees, emergency, fire and rescue personnel of Arlington County and surrounding communities who provided the critical assistance after the attack.

Irwin F. Edenzon, vice president and general manager Northrop Grumman Shipbuilding-Gulf Coast, talked about the shipyard's strong shipbuilding legacy and how that legacy will continue to shape the future as the company transitions to Huntington Ingalls Shipbuilding.

"We're committed to building quality ships our shipbuilders can be proud of and our sailors and Marines can depend on," said Edenzon. "Because I'm confident we are focused on safety, quality, cost and schedule – in that order – I'm certain we will continue to build many more great ships for the greatest Navy and Marine Corps the world has ever seen. And with those new ships we will begin building a proud new legacy – a legacy with roots planted deeply in our proud past, and a vision focused squarely on doing it even better in the future."

Ship sponsor Joyce Rumsfeld, wife of former Secretary of Defense Donald Rumsfeld, wowed the nearly 2,000 guests when she smashed a bottle across the bow of the ship officially christening LPD 24, Arlington.

"She's the right ship for today and tomorrow's capabilities," said U.S. Navy Adm. Jonathan W. Greenert, Vice Chief of Naval Operations. "She's exactly what we call for when we look out in our cooperative strategies for the 21st century. And she's exactly what the Marine Corps published in their 'Reshaping of America's Expeditionary Force for the Future.' We have to build quality and we have to build versatility. This very class of ship contributes the moment it enters the fleet."

Cmdr. Darren W. Nelson, of Rushville, Neb., is the ship's prospective commanding officer and will lead a crew of 360 officers and enlisted Navy personnel and three Marines. The ship is capable of embarking a landing force of up to 800 Marines.

LPD 24 is the third U.S. Navy ship to bear the name Arlington. The 11 ships of the LPD 17 class are a key element of the Navy's ability to project power ashore. Collectively, these ships functionally replace over 41 ships (LPD 4, LSD 36, LKA 113, and LST 1179 classes of amphibious ships) providing the Navy and Marine Corps with modern, sea-based platforms that are networked, survivable and built to operate with 21st Century platforms, such as the MV-22 Osprey.

The LPD 17-class ships are 684 feet long, 105 feet wide and displace approximately 25,000 tons. Their principal mission is to deploy the combat and support elements of Marine Expeditionary Units and Brigades. The ship can carry up to 800 troops and have the capability of transporting and debarking air cushion (LCAC) or conventional landing crafts, augmented by helicopters or vertical take-off and landing aircraft such as the MV-22. These ships will support amphibious assault, special operations or expeditionary warfare missions through the first half of the 21st century. 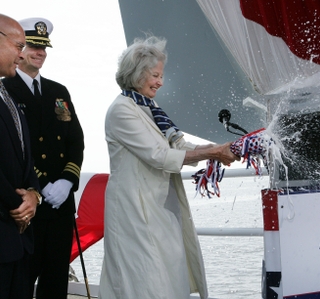