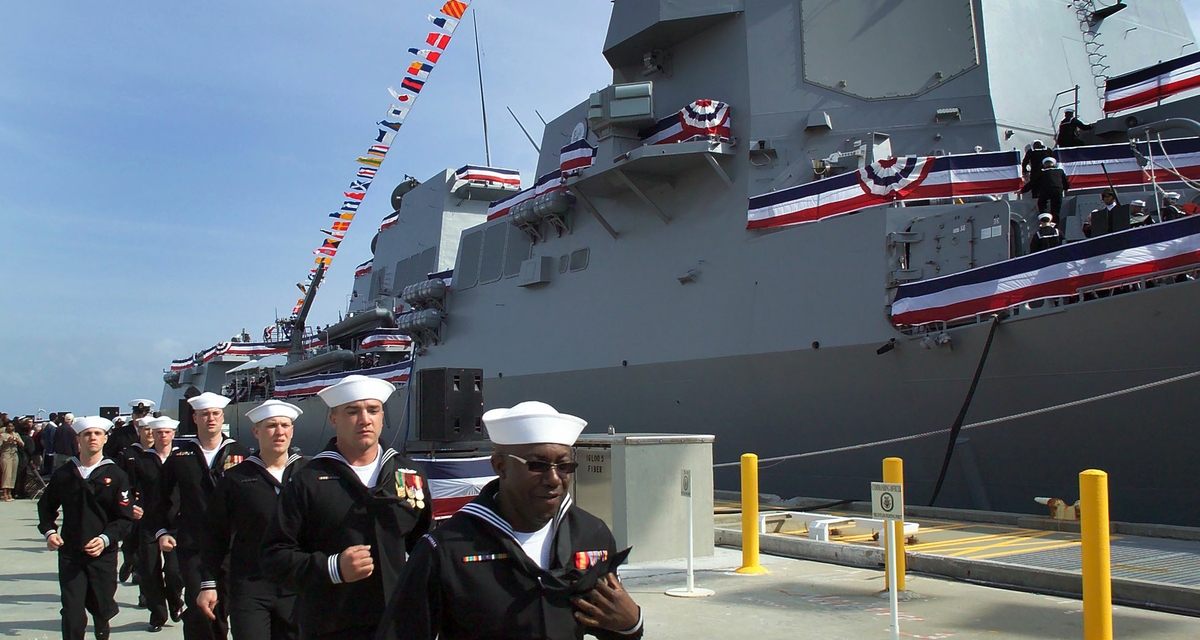 PENSACOLA, Fla., Jan. 30, 2006 (PRIMEZONE) -- More than 3,000 guests attended a ceremony here January 28 at Naval Air Station Pensacola to commission the Aegis guided missile destroyer USS Forrest Sherman (DDG 98). Built by Northrop Grumman (NYSE:NOC), the ship received her commissioning orders to join the U.S. Navy's Atlantic Fleet. Mrs. Ann Sherman Fitzpatrick, ship's sponsor, ordered the officers and crew to "man our ship and bring her to life," and with a response of "aye, aye ma'am," the DDG 98 crew moved through the crowd to take their positions on the ship.

"It is fitting the commissioning is taking place here, because her namesake, Admiral Forrest Sherman received his wings at Naval Air Station Pensacola in the early days of naval aviation," said U.S. Congressman Jeff Miller (R-Fla.). "The Forrest Sherman will be used in missions from anti-pirate operations to strikes at the heart of al-Queda. The war on terrorism is not easy. I know the men and women of the USS Forrest Sherman will live up to their motto and go forth with 'relentless fighting spirit.'"

The new destroyer honors Adm. Forrest Percival Sherman, who served as the Chief of Naval Operations from November 1949 until his death in July 1951, the youngest man to occupy the office. A previous ship named in his honor earned a Navy Unit Commendation and performed distinguished service off Lebanon (1958), Quemoy-Matsu (1958), Cuba (1961), and in the Indian Ocean (1980).

"Forrest Sherman represents the culmination of the art and expertise of building our nation's surface combatants," said Phil Teel, president, Northrop Grumman Ship Systems. "They have no peer in the world -- not even close. Today we build this ship for 55 percent of the cost of the original -- a far more capable ship for about half the price. This kind of stability empowers U.S. industry to give its best -- and we have."

Many Northrop Grumman employees lived and worked on the ship while the company's Pascagoula, Miss. facilities were being rebuilt after suffering major damage from Hurricane Katrina. Company executives and facility managers utilized the ship's berthing areas, mess decks and office spaces while developing the plan to restore the shipyard and resume shipbuilding.

"This ship's spirit has emerged out of adversity -- forged in a hurricane," said Teel.

Cmdr. Michael G. Van Durick, a Scranton, Pa., native and 1986 Naval Academy graduate, is the ship's first commanding officer, which has accommodations for 383 officers and enlisted personnel. The 9,200-ton Aegis destroyer has an overall length of 509.5 feet, a waterline beam of 59 feet and a navigational draft of 32 feet. Four gas turbine engines will power the ship to speeds in excess of 30 knots.

"When a young sailor from middle America takes up the call to defend America, we are all enriched and ennobled," said Cmdr. Van Durick, after officially taking command of DDG 98. "When a pipefitter rises up early every morning to go to work melding steel and ensuring it is done with precision and care we are ennobled. When a young sailor kisses his spouse goodbye and sets sail in defense of this terrific nation, we are enriched and ennobled. So today I am proud to say that we stand ready to serve our country to the best of our abilities."

"Today's ceremony is our reaffirmation that the very heart and soul of the United States, our nation's commitment to duty, honor, courage, strength and peace, shall continue to be carried by magnificent sailors aboard this great ship to all the nations around this globe," said U.S. Sen. Bill Nelson (D-Fla.). "Indeed, I believe we need to commission at least 10 new ships per year to sustain the size of our fleet, to modernize and maintain our industrial dominance and ensure that our Navy remain strong and ready for the heavy work that lies ahead in this long war on terror."

This highly capable multi-mission ship can conduct a variety of operations, from peacetime presence and crisis management to sea control and power projection. USS Forrest Sherman will be capable of fighting air, surface and subsurface battles simultaneously. The ship contains myriad offensive and defensive weapons designed to support maritime defense needs well into the 21st century.

"Ladies and gentlemen, just look at this ship -- from stem to stern -- 509 feet of American fighting steel," said U.S. Rear Adm. Mark H. Buzby, Deputy for Surface Ships, Chief of Naval Operations. "How I pity those who stand in your way." 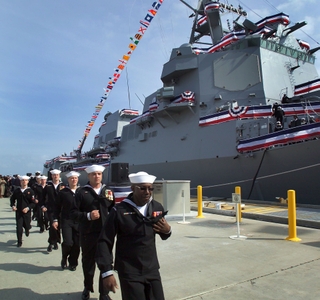 Manning the ship -- Officers and crew of the Northrop Grumman-built Aegis guided missile destroyer USS Forrest Sherman (DDG 98) move swiftly to their stations after being ordered to "man our ship and bring her to life," during commissioning ceremonies at Naval Air Station Pensacola on Saturday. Ship's Sponsor Ann Sherman Fitzpatrick, daughter of the ship's namesake, Admiral Percival Sherman, gave the order at the conclusion of the ceremony.