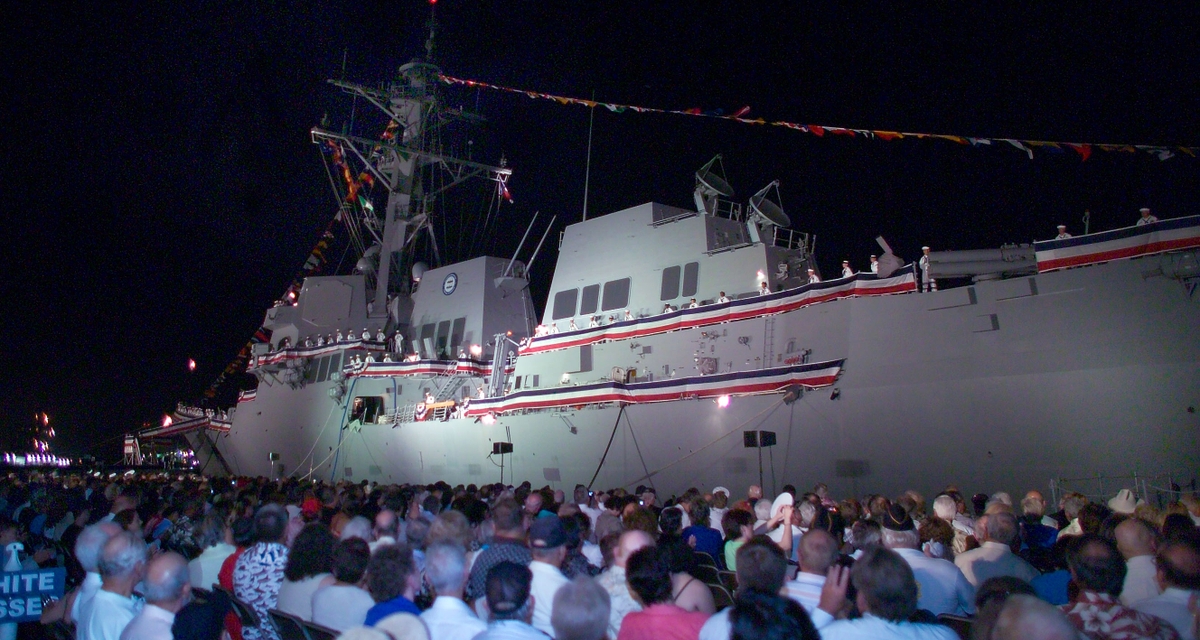 Kidd honors Rear Adm. Isaac Campbell Kidd, Medal of Honor recipient and the first flag officer to perish in World War II. Kidd was born in Cleveland, Ohio in 1884 and graduated from the U.S. Naval Academy in 1906.

Kidd's granddaughters, Regina Kidd Wolbarsht and Mary Corrinne Kidd Plumer, ship sponsors, ordered the officers and crew to "man our ship and bring her to life," and with a response of "aye, aye ma'am," the DDG 100 crew moved through the crowd to take their positions on the ship.

"The Kidd is a great symbol of our ability to defend this country," said principal speaker U.S. Congressman Ron Paul, 14th Congressional District, Texas. "It involves great technology in a time when our country is being challenged in other areas. We are still able to produce and manufacture a magnificent vessel like this, so I would say our capabilities and the capabilities of the Navy are alive and well."

On Dec. 7, 1941, Kidd was commander of battleship division one and senior officer present afloat during the Japanese attack on Pearl Harbor. From the bridge of his flagship USS Arizona (BB 39), Kidd directed the counterattack against enemy aircraft until the magazine of Arizona was exploded by enemy ordnance, eventually sinking the ship, and a direct hit to the bridge took his life. Kidd was posthumously awarded the Medal of Honor for his actions on that day.

Navy Cmdr. Richard E. Thomas of Westwood, N.J., is the ship's first commanding officer and will lead a crew of 276 officers and sailors. The 9,200-ton Kidd is the 24th Arleigh Burke-class destroyer built by Northrop Grumman Ship Systems sector and the 50th ship in the class. The ship has an overall length of 511 feet, a waterline beam of 59 feet and a navigational draft of 33 feet. Four gas turbine engines will power the ship to speeds in excess of 30 knots.

"After Hurricane Katrina dealt a mighty blow to the Gulf Coast and to Kidd, the workers at Northrop Grumman toiled for the next year to repair the damage," said Cmdr. Thomas. "The ship you see tonight is a testament to the drive and determination of the workers. As a result of their hard work, Kidd is a stronger and better ship today. I want to personally thank everyone who worked long hours to build what is without a doubt the best destroyer in the fleet."

"Today, USS Kidd enters her commissioned service having already fought, and won, a battle for her very life," said Tim Farrell, vice president and general manager of U.S. Navy programs for Northrop Grumman Ship Systems sector. "In the midst of the ferocity of Hurricane Katrina, Kidd was picked up at her moor by an enormous wall of water and was slammed down onto the pier. Terribly holed, the ship began to flood. The shipyard crew aboard the ship valiantly fought the might of the storm and the incoming water, ultimately saving the ship. To the captain and his crew, please take this ship and sail the world oceans to protect freedom and project the will of this great nation."

This highly capable multi-mission ship can conduct a variety of operations, from peacetime presence and crisis management to sea control and power projection. USS Kidd will be capable of fighting air, surface and subsurface battles simultaneously. The ship contains a myriad of offensive and defensive weapons designed to support maritime defense needs well into the 21st century.

Northrop Grumman Corporation is a $30 billion global defense and technology company whose 122,000 employees provide innovative systems, products, and solutions in information and services, electronics, aerospace and shipbuilding to government and commercial customers worldwide. 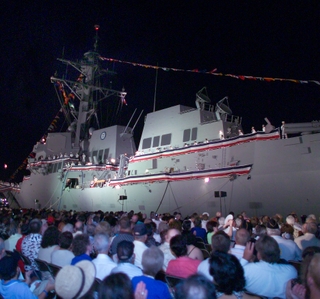 After getting the order from ship's sponsors Regina Kidd Wolbarsht and Mary Corrinne Kidd Plumer to "man our ship and bring her to life, "the officers and crew with a response of "aye, aye ma'am"

After getting the order from ship's sponsors Regina Kidd Wolbarsht and Mary Corrinne Kidd Plumer to "man our ship and bring her to life, "the officers and crew with a response of "aye, aye ma'am," double-timed it through the crowd to take their positions on the ship.