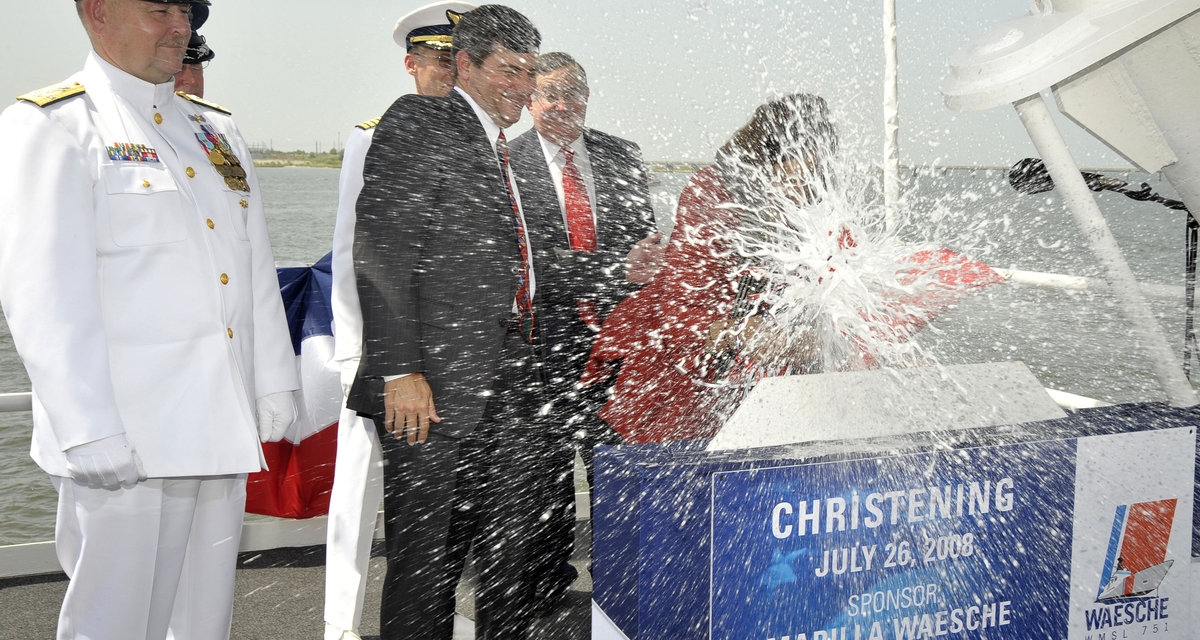 Waesche is named for Adm. Russell R. Waesche, who was the first Coast Guard commandant to achieve the rank of admiral. He led the Coast Guard from 1936 to 1946, which is the longest tenure of any USCG commandant. Adm. Waesche's granddaughter Marilla Waesche Pivonka broke a bottle across the ship's bow to a rousing ovation, and also performed a song to honor the ship and her grandfather.

"Our nation, like many others, is a maritime nation with intricate transportation networks," said keynote speaker U.S. Air Force Gen. Victor E. Renuart, commander of North American Aerospace Defense Command and U.S. Northern Command. "The nation needs a greater awareness and effective understanding of this maritime activity. This National Security Cutter directly contributes to the Coast Guard's ability to achieve this maritime domain awareness and, in turn, this helps protect America."

Waesche is the second ship in the new Legend-class of highly capable, technologically advanced, multi-mission cutters for the U.S. Coast Guard and the Department of Homeland Security.

"Shipbuilders take great pride in what they do," said Mike Petters, corporate vice president and president of Northrop Grumman Shipbuilding. "A shipbuilder knows that with each weld, each pipe detail, each engineering drawing, he or she is building a platform that will serve as a home to a Sailor, Soldier or Marine. A ship that will also, if called upon, be ready to protect America."

"The construction of this ship has required a great deal of skill, labor, and tenacity by the Northrop Grumman shipbuilders here in Pascagoula," said Paul Schneider, deputy secretary of Department of Homeland Security. "Waesche highlights the essential cooperation between the government and private industry. Waesche is a tangible reflection of our commitment to protect national security and modernize the United States Coast Guard fleet."

The National Security Cutter (NSC) is a 418-foot ship with a 4,300-ton displacement at full load. Powered by a twin screw combined diesel and gas turbine power propulsion plant, the NSC is designed to travel at 28 knots maximum speed. The cutter includes an aft launch and recovery area for two rigid hull inflatable boats, a flight deck to accommodate a range of manned and unmanned rotary wing aircrafts, and state-of-the-art command and control electronics.

"I followed Adm. Waesche's career my entire career," said Adm. Thad Allen, Commandant of the U.S. Coast Guard. "While I did not know him directly, I know him from his deeds and actions and what has been written about him. He was an extraordinary and towering figure in the Coast Guard, one to be emulated by anyone who will follow him."

Production of the second National Security Cutter at Northrop Grumman Shipbuilding represents a new approach to the design and construction of surface ships. In partnership with the U.S. Coast Guard, Northrop Grumman and Lockheed Martin, the joint venture partners of Integrated Coast Guard Systems, have been working side-by-side to build a class of ships that is not only capable and flexible, but also an economical and enduring platform. 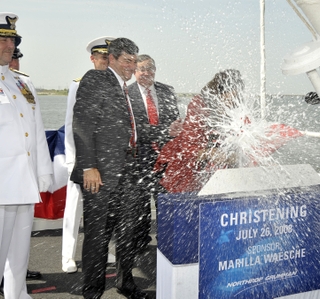 WASHED IN TRADITION: Marilla Waesche Pivonka (right), ship's sponsor, breaks a traditional bottle spraying the bow and platform guests at the christening of the Northrop Grumman-built U.S. Coast Guard National Security Cutter Waesche (WMSL 751). The ship is named for her grandfather, Adm. Russell Randolph Waesche, who served as the commandant of the U.S. Coast Guard from 1936 until 1946. Also on the platform are (left to right) U.S. Coast Guard Commandant Adm. Thad Allen; Mike Petters, vice president and president of Northrop Grumman Shipbuilding; and Paul Schneider, deputy secretary of the Department of Homeland Security.