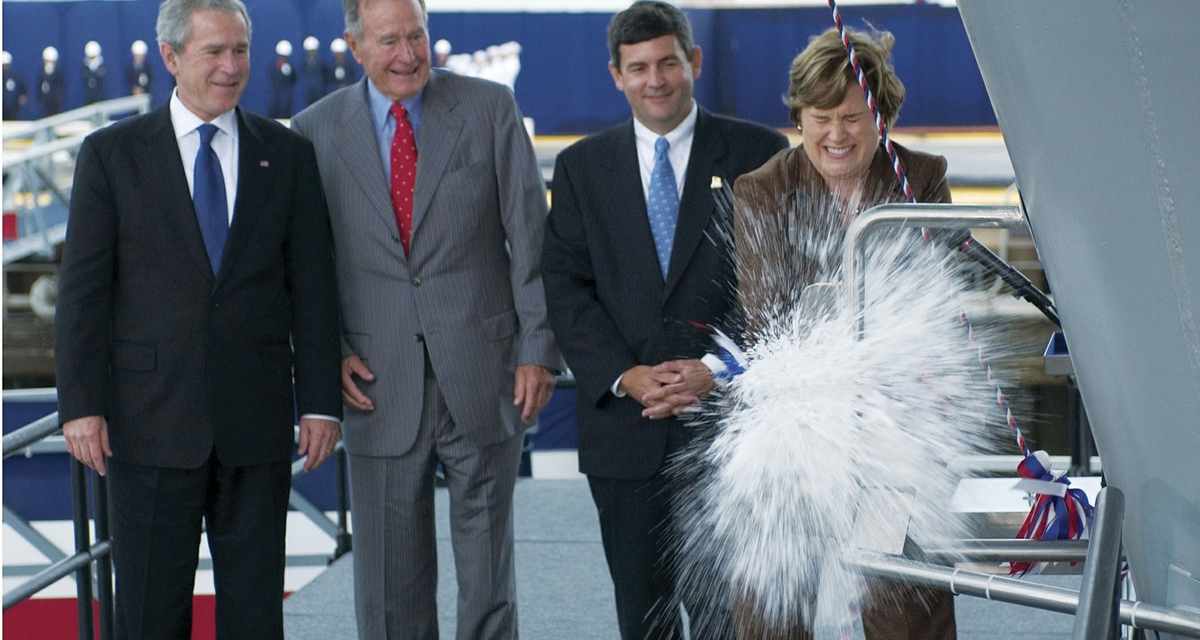 "I can't wait to see this remarkable, state-of-the-art vessel go to sea," Bush said. "And when it does, I want to get permission from the commander in chief to be on board. I hope the American people will accept my deepest gratitude for the chance to serve this nation, an honor that touches deep in my heart."

Several members of the Bush family were on hand for the special occasion, including the former president's wife Barbara and their daughter, Doro Bush Koch. Mrs. Koch serves as the ship's sponsor and performed the traditional honor of breaking a bottle of American sparkling wine across the ship's bow during the ceremony.

President George W. Bush also attended and honored his father during the ceremony as a special guest speaker.

"On this proud day," President Bush said, "the children of George H.W. Bush bless their father's name, the United States Navy honors his name, and the ship that bears his name sails into this young century as a symbol of America's strength and freedom."

"Today, we christen a great ship with a great namesake," Sugar said. "She was built by people with pride and dedication, much like the crews who will man her."

Petters paid special tribute to the men and women who build aircraft carriers. "They do this work day in and day out in blistering heat, freezing cold and in the rain," he said. "It is dangerous work. It is difficult and demanding work. And it is noble work.

"Every ship built here has proven a credit to our nation and to the proud people who build them," Petters added. "I know that this mighty ship, George H.W. Bush, will follow in that tradition."

The George H. W. Bush is the nation's tenth and final Nimitz-class aircraft carrier. Northrop Grumman Newport News has built 11 of the U.S. Navy's 12 active carriers, including all 10 ships of the Nimitz class.

At 1,092 feet in length, George H. W. Bush is nearly as long as the Empire State Building is tall. Upon delivery to the Navy in late 2008, it will weigh 97,000 tons and carry more than 80 combat aircraft. Its top speed will exceed 30 knots and powered with two nuclear reactors, it will operate for more than 20 years without refueling. For additional information, visit www.nn.northropgrumman.com/bush. 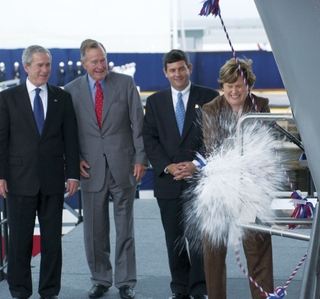 (Left to right) President George W. Bush, Former President George H.W. Bush, and Mike Petters, president, Northrop Grumman Newport News, look on as Ships' Sponsor Doro Bush Koch christens CVN 77, the aircraft carrier George H.W. Bush. "I would like to join my father, my brother, my family in saluting not only the men and women who built this remarkable ship, but also the courageous men and women who will soon man it," Koch said before christening the ship. (Photo by Chris Oxley)