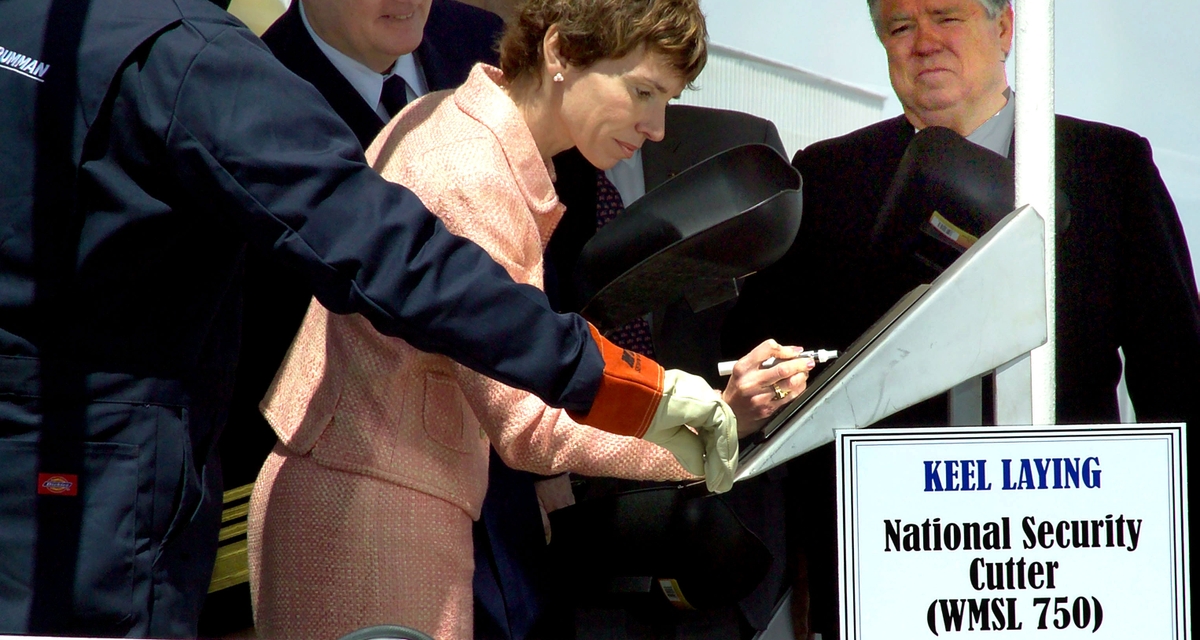 The National Security Cutter is the largest cutter and the crown jewel in the Coast Guard's sweeping "Deepwater" modernization program. This ceremony marks an important milestone in what will be the most technologically advanced, multi-mission cutter in the Coast Guard fleet.

The principal speaker at the event was the honorable Michael Chertoff, secretary, U.S. Department of Homeland Security. Secretary Chertoff's wife, Meryl Chertoff, is the sponsor of the first-of-the-class ship that will lead the Coast Guard's future fleet under the Deepwater acquisition program.

"This National Security Cutter, the keel of which we lay today, is a visible symbol of the new generation of equipment that we are going to provide to the men and women of the Coast Guard," said Secretary Chertoff . "Importantly, this cutter is not just a ship, but it is an integrated system-a system that is designed to perform in the defense of this country. In a way, that's emblematic of the Deepwater program itself, which is not simply a collection of individual assets, cutters, ships and aircraft, but is part of a capability...part of a performance-based effort designed to deliver a result, a successful mission of protecting these United States."

Mississippi Gov. Haley Barbour said, "This shipyard is 'America's shipyard' because it is the most productive in America with the greatest workforce in America that produces the best product in the shipbuilding industry. This shipyard has been the crown jewel of our state's economy, because the people that work here do their jobs so well; and because Northrop Grumman and our state have insured that the capital investments have been here."

U.S. Sen. Thad Cochran (R-Miss.), in speaking about the great partnership between industry and the state said, "I am very proud indeed, that this ship is being built in Mississippi. I congratulate the management and the employees of Northrop Grumman and Lockheed Martin for forming this successful joint venture. (The shipyard) is a vital component in the partnership, and it is highly valued as the economic engine of the Mississippi Gulf Coast."

Echoing those sentiments, U.S. Sen. Trent Lott (R-Miss.) remarked, "I am delighted that this National Security Cutter is being built in my hometown. I know the men and women of this shipyard. They have a long and proud tradition of doing the job within the budget, ahead of schedule and of producing quality ships."

As host of the event, Philip A. Dur, president, Northrop Grumman Ship Systems remarked, "Today's keel laying ceremony marks the beginning and a culmination. The beginnings of the first Coast Guard cutter built here in Pascagoula, and the culmination of countless hours of research planning and commitment to making the National Security Cutter a formidable asset in America's homeland security effort. We are proud to be part of this program, the largest recapitalization effort in the Coast Guard's history. We are committed to making this ship the best first-of-the-class ship ever built by Northrop Grumman or its antecedents."

At the conclusion of the program, Mrs. Chertoff and Adm. Thomas H. Collins, commandant, U.S. Coast Guard, were summoned to the podium, where they both signed a ceremonial plate, which was then permanently welded and will remain a part of this ship throughout its service life. At that time, Mrs. Chertoff, as ship's sponsor, recognized the ship's keel to be "truly and fairly laid."

The National Security Cutter will be 418 feet long, sustain speeds of 28 knots, be capable of 29 knots sprint speeds and will have an endurance of up to 60 days.

Northrop Grumman Ship Systems includes primary operations in Pascagoula and Gulfport, Miss.; and in New Orleans and Tallulah, La., as well as in a network of fleet support offices in the U.S. and Japan. Ship Systems is one of the nation's leading full-service systems companies for the design, engineering, construction and life-cycle support of major surface ships for the U.S. Navy, Coast Guard and international navies. 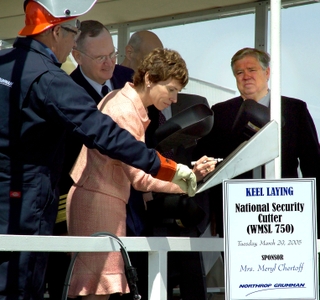