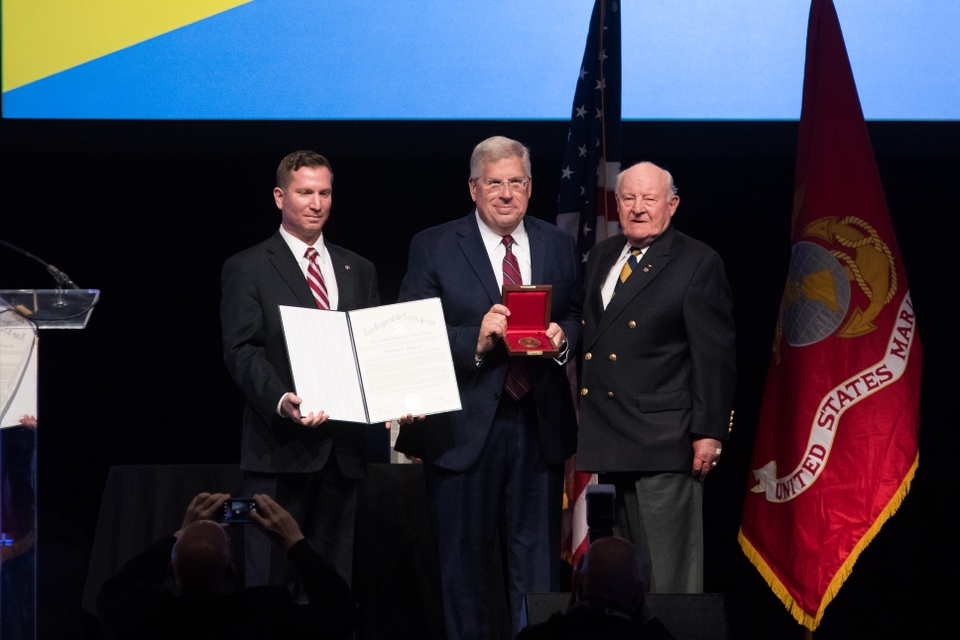 This award honors an industry leader who has demonstrated the leadership, statesmanship and dedication to the nation that were exhibited by the award’s namesake.

Mulherin, who retired from the company in July 2017 after a distinguished 36-year career, was honored at the Navy League’s annual Sea-Air-Space banquet, held on Monday at the Gaylord National Resort and Convention Center in National Harbor, Maryland.

“Although this award has my name on it, the reality is that it’s a tribute to all of the wonderful people who have supported my shipbuilding journey,” Mulherin said. “Shipbuilding is a team sport, and this award reflects my team—the smart and talented group of people I’ve had the honor and privilege of getting to build ships with. It also reflects my team at home—my family who have been by my side throughout this extraordinary journey.”

Mulherin began his career in 1981 working third shift as a nuclear test engineer and over the next three decades earned positions of increasing responsibility. He assumed the role of president in 2011.

During his career, Mulherin supported several shipbuilding and maintenance programs, including the construction and overhaul of nuclear-powered Nimitz-class aircraft carriers. In 1999, Mulherin began working on the design for the next-generation aircraft carrier, CVNX. The program evolved into what is known today as the Gerald R. Ford program. The design and delivery of the first ship in the class, USS Gerald R. Ford (CVN 78), is credited as one of his greatest accomplishments.

“Very few shipbuilders can say that they have been a part of eight aircraft carrier deliveries,” said Mike Petters, HII’s president and CEO. “Matt’s enduring commitment to our company and Navy partners, combined with his leadership and work ethic, leave quite a legacy. He built a foundation for our future success by shepherding the delivery of first ship in a new class of aircraft carrier that will protect our nation and endure for the next 50 years. Just as important, though, are the friendships and relationships he has made that have helped to build future generations of shipbuilders.”

Mulherin also led the company through the highly successful ramp-up of the Virginia-class submarine program to two ships per year and laid the foundation for Newport News to support production of Columbia-class ballistic submarines. However, his legacy extends well beyond ships.