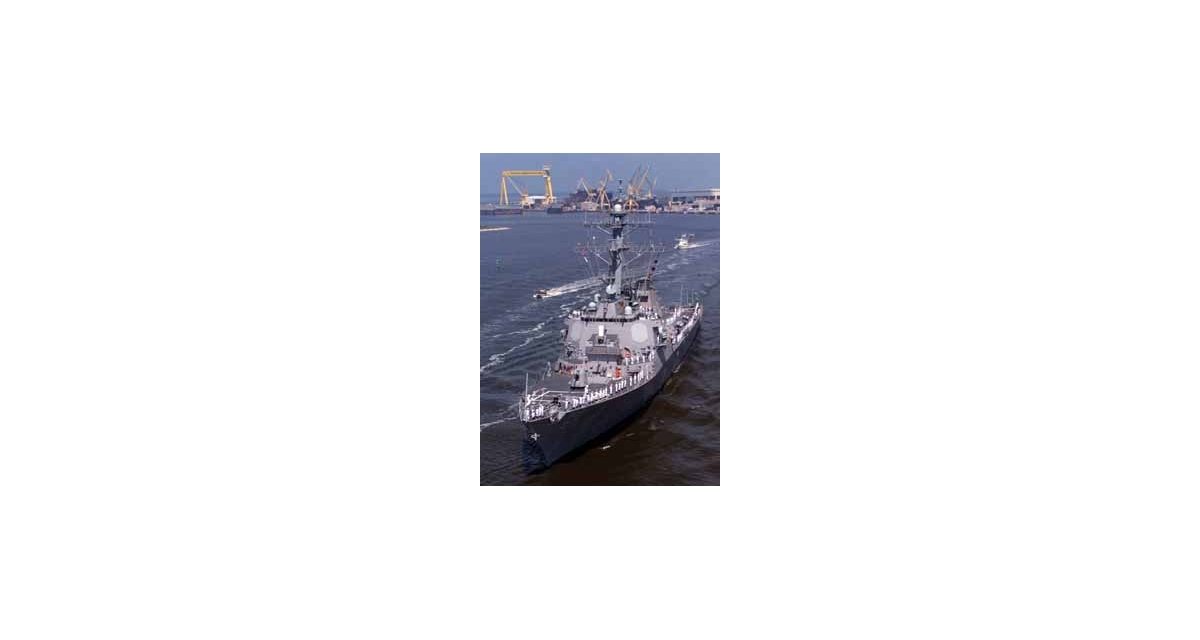 A photo accompanying this release is available at: http://media.wieck.com/public.html?WIK2002041964243

"There is not a doubt in my mind that you build the world's greatest ships at Northrop Grumman Ship Systems, and this ship is a testimony to your hard work," said U.S. Representative Gene Taylor of Mississippi's Fifth Congressional District. "And to the brave young men and women who are going to man this vessel, Mississippi has given you our best and we thank you for what you do for our nation."

"On this wonderful day we recognize the skill and craftsmanship of the Navy team, Northrop Grumman and our industry partners who have restored the Cole," said John Young, assistant secretary of the Navy for Research, Development and Acquisition. "Today, we must also remember the 17 sailors who died giving their lives in the tragic attack. In hindsight, we all now see that the attack on Cole was really the first strike against the United States in this war. Cole's restoration provides a clear and confident statement of America's determination to overcome terrorism."

Following a terrorist attack in Aden, Yemen, in October 2000, Cole was transported to Northrop Grumman Ship Systems on the heavy lift ship Blue Marlin, and arrived in Pascagoula on Dec. 13, 2000, after a six-week journey.

"I've come here today to talk to those men and women who are wearing hard hats, welder goggles and dusty coveralls -- I've come here to thank you," said Rear Adm. John G. Morgan Jr., USN, commander, Cruiser Destroyer Group Twelve, Enterprise Battle Group, to the Northrop Grumman shipbuilders who attended the ceremony. "Through your brains and your brawn, you have given us a gift. That gift is 505 feet of American steel that is right behind me and I thank you for that gift. It is a gift to the Navy and it is a gift to America. I want the Cole to sail proud from this harbor and I want the ship to know that she is joining a great team."

"We are saying goodbye to our partners in the restoration of a great warship which is also a national symbol of the indomitable spirit of the United States Navy," said Dr. Philip A. Dur, Northrop Grumman corporate vice president and president of the company's Ship Systems sector. "We celebrate USS Cole's return to the fleet, to take her place in the line again. The American people and the people in this shipyard wanted to do everything in their power to put this ship back into place where she can continue to protect America's interest and the freedoms which we take for granted."

Dur also read a letter from U.S. Sen. Trent Lott of Mississippi, who stated, "The skilled and experienced workers of Northrop Grumman Ship Systems were charged with returning this national symbol to combat effectiveness in short order. They responded to the unique challenges of USS Cole with the expertise and enthusiasm that have become the hallmark of Ingalls."

"The Navy industry team set new benchmarks for this reconstruction," said Capt. Phil Johnson, USN, supervisor of Shipbuilding, Conversion and Repair, Pascagoula. "The Navy-Northrop Grumman Ship Systems team's intimate knowledge of USS Cole and the craftsmanship and abilities of the Northrop Grumman employees was instrumental in achieving this success."

During peak production periods, as many as 700 Northrop Grumman Ship Systems employees were assigned aboard Cole.

"Teamwork has made this happen," said Cmdr. Kevin Sweeney, USN, Cole's commanding officer. "The Navy made the right decision to bring the ship here and Ingalls did it right and I thank you. Our goal is not to leave Pascagoula nor is our goal to get back to Norfolk. Our goal is to take Cole to sea and to start the training operations with our battle group. Admiral Morgan, we are ready."

The ship was originally built in Pascagoula by Northrop Grumman Ship Systems, and was delivered to the U.S. Navy in 1996. The company has delivered a total of 16 Aegis guided missile destroyers to the Navy, with nine more ships under contract.

Northrop Grumman Ship Systems, headquartered in Pascagoula, Miss., includes facilities in Pascagoula and Gulfport, Miss., as well as New Orleans and Tallulah, La. The sector, which currently employs more than 17,000 shipbuilding professionals, primarily in Mississippi and Louisiana, is one of the nation's leading full service systems companies for the design, engineering, construction and life cycle support of major surface ships for the U.S. Navy, U.S. Coast Guard and international navies, and for commercial vessels of all types. 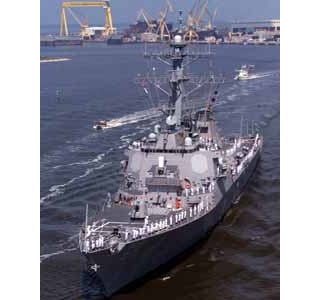 The USS Cole is shown here as it departs Pascagoula, Miss., Friday for its homeport in Norfolk, Va.

The USS Cole is shown here as it departs Pascagoula, Miss., Friday for its homeport in Norfolk, Va. Following a terrorist attack in October 2000, the Cole was restored at Northrop Grumman Corporation's Ingalls Operations in Pascagoula.