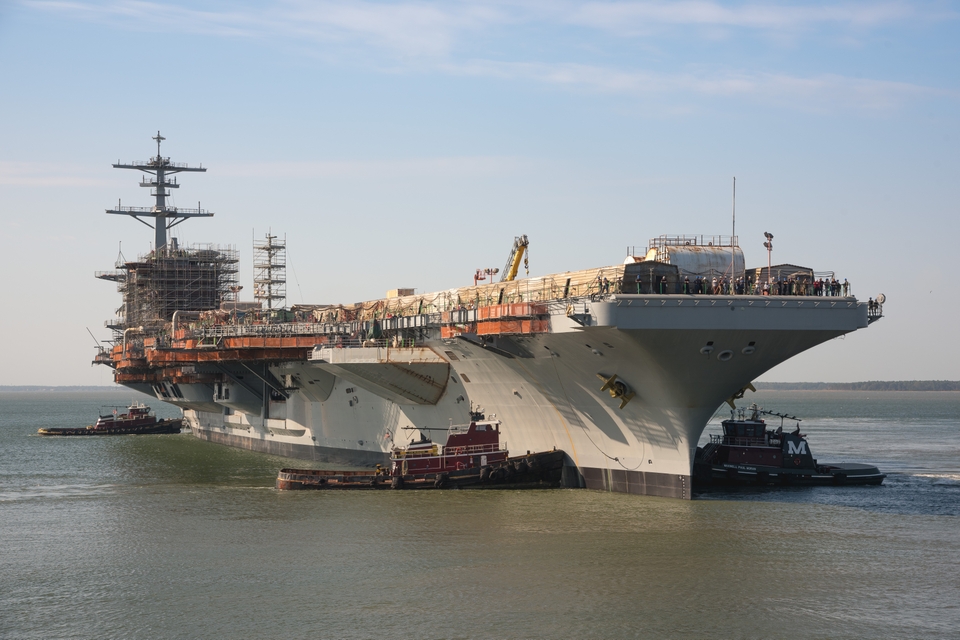 Following the recent flooding of more than 100 million gallons of water into the dry dock, George Washington was successfully moved to an outfitting berth, where it will begin final outfitting and testing.

The overhaul now is more than 60% complete and on track to be completed in late 2021.

“Getting George Washington out of the dry dock and back into the water is an important milestone in the overhaul process for shipbuilders, sailors and our government partners,” said Chris Miner, Newport News’ vice president of in-service aircraft carrier programs. “Over the next 24 months we will focus on readying the ship for the next 25 years of its operational life. Once our work is complete, George Washington will leave Newport News Shipbuilding as the world’s most technologically advanced Nimitz-class warship in the fleet.”

During the dry dock phase of the RCOH, George Washington underwent significant upgrades and extensive repair work both inside and outside the ship. In addition to defueling and refueling its power plant, Newport News shipbuilders have re-preserved approximately 600 tanks and replaced thousands of valves, pumps and piping components. On the outside, they performed major structural updates to the island, mast and antenna tower; upgraded all aircraft launch and recovery equipment; painted the ship’s hull, including sea chests and freeboard; updated the propeller shafts, and installed refurbished propellers.

During the next phase of the complex engineering and construction project, shipbuilders will finish up the overhaul and installation of the ship’s major components and test its electronics, combat and propulsion systems before the carrier is redelivered to the Navy. This period also will be dedicated to improving the ship’s living areas, including crew living spaces, galleys and mess decks.

“Taking the ship successfully out of the dry dock and over to our waterside pier marks a significant moment in the ship's history and in our RCOH period,” said Capt. Kenneth A. Strong, the ship’s commanding officer. “With the ship back in the water, we can turn our attention to our next major milestones and finishing our maintenance period to return this vital national asset back to the fleet.”

USS George Washington arrived at Newport News in August 2017 and is the sixth Nimitz-class aircraft to undergo its RCOH—the mid-life refueling overhaul and maintenance availability that produces a recapitalized carrier capable of supporting current and future warfare doctrine. Once George Washington’s RCOH is complete, the carrier will be equipped to operate in the U.S. Navy fleet for the second half of her 50-year expected service life. 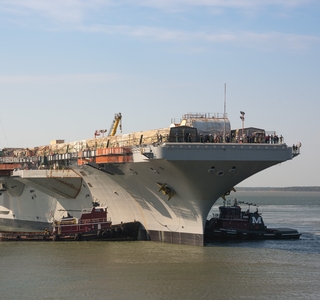 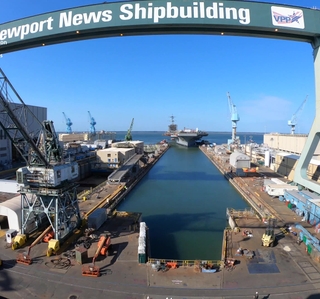 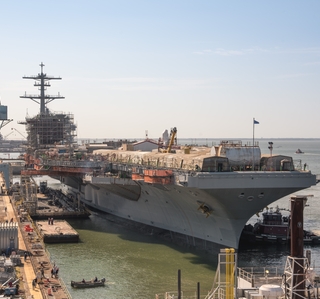 The aircraft carrier USS George Washington (CVN 73) was recently moved from a dry dock to an outfitting berth at Huntington Ingalls Industries’ Newport News Shipbuilding division, where the next phase of its refueling and complex overhaul (RCOH) will be completed. Photo by Ashley Cowan/HII

Following the recent flooding of more than 100 million gallons of water into the dry dock, George Washington was successfully moved to an outfitting berth, where it will begin final outfitting and testing.