Mike Petters, HII president and CEO, encourages the 54 new graduates of An Acheivable Dream Academy to live the American Dream (as prepared) 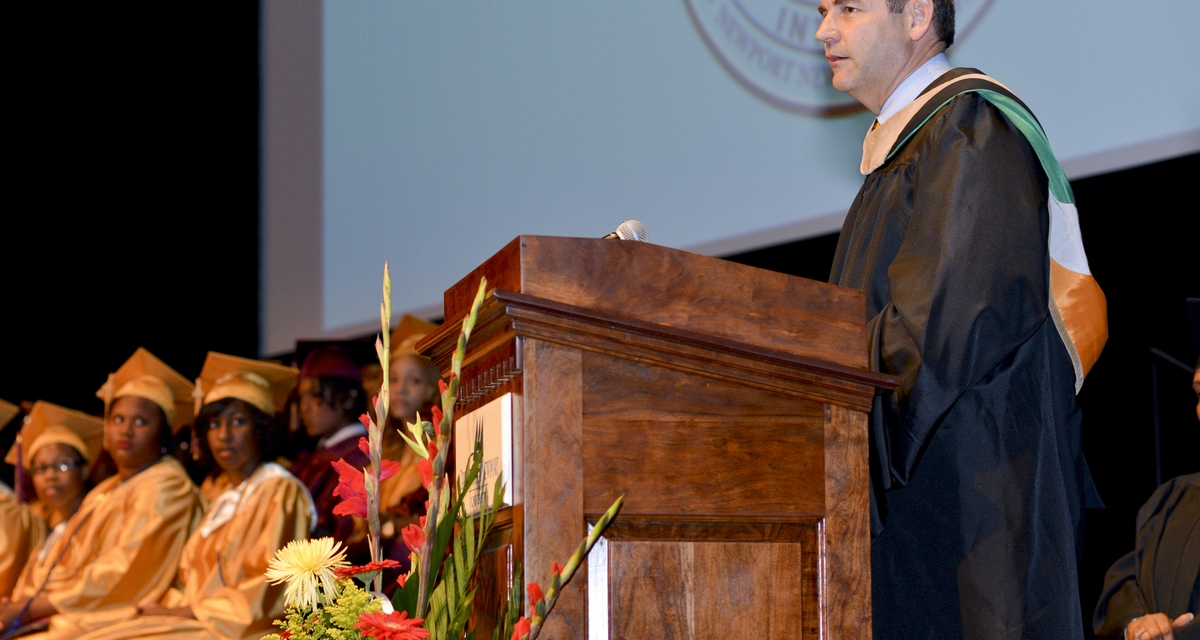 Congratulations! The day is here. Your day. A day for celebration. For hugs. For smiling. For pictures. For selfies. Yet my hope is that it’s also a day for reflection.

First, you should reflect on all you’ve accomplished to get here. The many challenges – some of which only you know about. The class projects. The homework. The exams. The days when you wanted to do anything other than go to school, but you showed up anyway.

And then take some time to reflect upon the joys. The friends you made. The skills you learned. How your world became bigger through learning. The teachers who, somewhere along the way, became more than teachers. They became mentors.

I hope you are proud of yourselves. Because Nancy and I are surely proud of each and every one of you. You are graduating from a school aptly named An Achievable Dream. And you’ve achieved so much.

I believe you could easily substitute the word “American” for “Achievable.” Because many of the things you have achieved, and many of the things you’ve yet to achieve, are possible – are achievable – because you live in America. And my wish – my advice for you – is that as you go forth in life, whatever path you choose to take, you also become an ambassador for the American Dream.

The American Dream. It’s a term that’s often written about, debated about, and one that is referenced to in lyrics that date back to Elvis Presley and Chuck Berry right up to Madonna and Jay-Z.

The term “American Dream” was coined in a 1931 book by American author James Truslow Adams called The Epic of America. His definition of the American Dream was “that dream of a land in which life should be better and richer and fuller for everyone with opportunity for each according to ability or achievement.” Note that word “achievement.”

For me, the American Dream is the opportunity to achieve your potential no matter where you came from. And for me, the path from growing up in an orange grove in Florida to watching you receive your diploma tonight is what separates America from anywhere else on earth. The American Dream is something you achieve. It is not something you receive. And you know better than most that achievement is hard work. Hard work does pay off. Hard work creates new options for your future and allows you to change your destiny.

And then I realized that there was more to the American Dream than personal achievement. The founder of An Achievable Dream, Walter Segaloff, figured that out about the American Dream a long time ago. He recognized that for some children to even have a shot at it – because of circumstances far beyond their control – it would take more than hard work. It would take people spending time on them, showing them that they were important. It would take teachers. Administrators. Community members. City and state leaders. People who each day live their American Dream by helping others achieve it.

Now I know this will surprise everyone here, but I am not exactly an expert on the hip-hop music scene. Yes, I know you’re shocked. The film director Ron Howard – the faculty and administration here may remember him as Opie from “Andy Griffith” – did a documentary film last year on Jay-Z’s “Made in America” music festival. The film is titled, “The American Dream.” And yes, it’s about hip-hop, but it’s also about the American Dream.

Jay-Z certainly is living what some could define as the American Dream. And I say this not because of his fame or wealth, but because he found something he loved, something that inspired him to work hard. His hard work enabled him to change his destiny, to change the path he was on, living a very tough life in the Marcy projects in Brooklyn.

And most importantly, his hard work creates options, not just for him, but for his community as he fosters new talent and runs his foundation, The Shawn Carter Foundation, aimed at helping underprivileged youth. In fact, he organized the “Made in America” music festival to raise money for the United Way of Greater Philadelphia and Southern New Jersey.

Jay-Z is quoted in the documentary as saying, “I believe that every human being has genius-level talent,” adding that hard work and finding your particular area to shine are keys to success. He adds, “There are no chosen ones.” Sounds to me like a modern-day definition of the American Dream.

HII President and CEO Mike Petters addresses An Achievable Dream’s 2014 graduating class. In his remarks, he encouraged the graduates to become ambassadors for achieving the American dream. Photo courtesy of Helen’s Place Photography