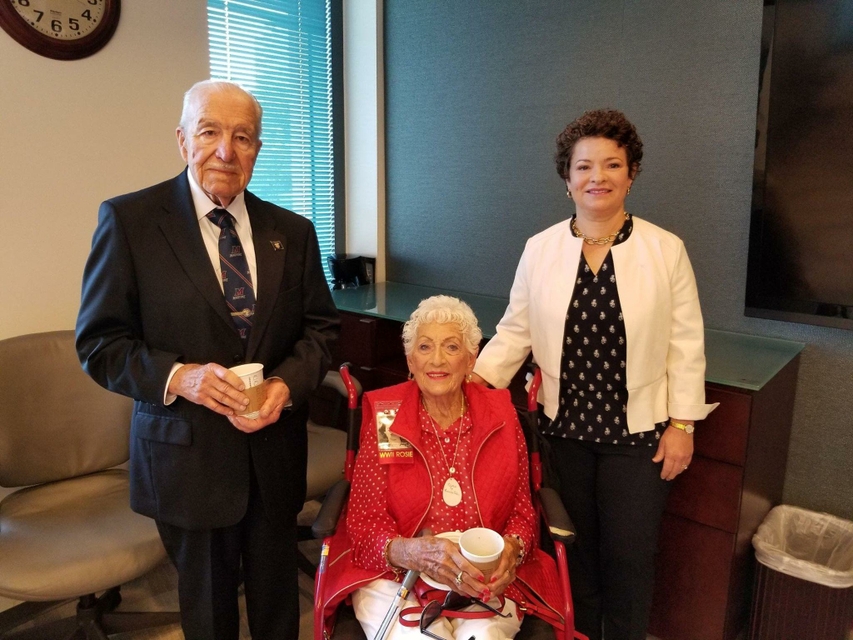 It’s an honor for me to speak before such a distinguished group of maritime professionals. The maritime industry provides a conduit to the global economy that keeps the world as we know it safe and thriving. Today, we recognize and honor the fortitude and opportunity that the maritime industry affords us. And we are proud to be your partners.

For those of you who don’t know much about Newport News Shipbuilding, we are the nation’s sole designer, builder and refueler of nuclear aircraft carriers…And we are one of only two shipyards capable of designing and building nuclear submarines. The platforms we build not only help defend our freedoms, they support and safeguard the global economy through the protection of our world’s sea lanes.

Our shipbuilders are 24,000 strong, making us the largest industrial employer in Virginia. And our company is 133 years old.

For the majority of those years, we have been a male-dominated business—much like the rest of the maritime and defense industries. But in the words of legendary singer/songwriter Bob Dylan—the times they are a-changin.

Almost two years ago, I became the 20th president of Newport News Shipbuilding and the first woman to hold the position. To say that I am honored and privileged to be our company’s first woman president is an understatement. I feel tremendous responsibility, because I know that when you are the first at anything, there are always more eyes on you. I also recognize that it’s easier to aspire to what you can see.

I have to set an example, and I have the responsibility to open doors of opportunity and keep them open while I’m president. More importantly, I have to ensure that the doors remain open after I’m gone.

Growing up, I was fortunate to have opportunities, and I’m no stranger to being the first to do something. For example, I was the first girl to play Little League baseball in my hometown of St. Louis.

I think it reflects the era in which I grew up. I had opportunities to lead, and my parents never limited my interests.

When I graduated from high school, there was a strong effort to help guide all students – particularly young women and young minority students – toward the STEM fields…I chose to attend the U.S. Merchant Marine Academy because of the choices it created, and I was among a small percent of women there.

I can tell you that my experiences as a Merchant Marine have helped me grow to where I am today, and the people I shared those experiences with are some of my best friends 30 years later. So—I can’t miss the opportunity to give a shout out to the Class of 1986—which we all know is the best class in the history of King’s Point!

BUT, as I contemplated my decision to go to the Academy, parents, teachers and friends all had strong words of advice for me. Imagine that?

Have you ever found yourself – with the best of intentions…advising a young woman to carefully consider – or reconsider – her choice because you knew how hard it would be for her as a minority? If so, I am here to tell you that despite your best intentions, you may be part of the problem.

If it had not been for my parents—if either of my parents had said that—I don’t know where I would be today.

When I think back on my first year as president, it was a bit of a whirlwind. I had meetings with my senior leadership team…meetings with Navy leadership...I made multiple trips to Capitol Hill and I hosted a series of town hall meetings with our shipbuilders.

And I read A LOT.

Another thing that happened—something that’s a tradition at Newport News Shipbuilding—was the commissioning of my painted portrait.

Now—for the record—I’m not a big fan of getting my picture taken, unless, of course, it’s a selfie. So the idea of having a painting commissioned of myself was a bit daunting, to say the least.

Daunting because I’ve climbed the stairwell many times where the shipyard presidents’ portraits hang, and I’ve always regarded them with such admiration and respect. Many times I’ve found myself wondering if I was doing all the right things…as if they were watching me.

Each of those leaders has made his own indelible mark on our company.

Now, as I climb that stairwell and see my own mug hanging up there, I find myself wondering what legacy will I leave?  I’ve come to realize that my portrait is more than just paint on a canvas. It’s the first page in another important chapter of our company’s history…

And that’s our company’s future.

I’m happy to say that we’re off to a pretty good start. In fact, I would argue that there’s never been a more exciting time than right now to be a shipbuilder! For the first time in over a decade, not only are ALL of our available dry docks FULL, but the nation has a defense budget!

We have more work under contract than we have had in over two decades…and we are working at a time when a new workforce, new technology and increased Navy needs are intersecting all at once.

We recently signed a two-ship aircraft carrier contract, a historic milestone for Newport News Shipbuilding, and a contract that, alone, will keep thousands of shipbuilders employed for over 14 years. It lays the foundation for work we will perform into the year 2032 on ships that will serve our nation into the 2082 timeframe.

We do important work—work that is critical to our U.S. Navy and our nation’s defense. And how we are doing that work is even more exciting!

In short, we are taking a 133-year-old company and we are transforming how we build ships, how we run our business and how we improve our work experience. We are working smart every day to innovate, to rethink and reinvent the business of shipbuilding…

And that means being open-minded and willing to do things differently. It means being honest with yourself and others, even when you know it’s something they may not want to hear. It means having the courage to fail, and learning from it. And it means empowering everyone to share their opinions and have their voices heard.

Transformations like the one we are undergoing at Newport News Shipbuilding are opening lines of communication and blurring the boundaries of hierarchy in a wonderful way. It’s allowing natural leaders to emerge in a safe and accepting environment. It’s driving a change in our culture that is more inclusive and diverse.

I am committed to creating that culture…And let’s face it—a culture can’t change without the benefit of diverse perspectives.

Of our 24,000 employees at Newport News Shipbuilding, women comprise only about 18 percent of our workforce. And only about 13 percent of our management positions are held by women. It’s a statistic my leadership team and I are working to change.

The video we just saw reminds me of a really neat black and white photo hanging in my office. It was taken in 1942 of the first women welders at Newport News Shipbuilding. I think about what it must have been like for them, and how many of them were actually disappointed when the boys returned from the war.

Think about it. The war opened opportunities for these women to try something that was considered a “man’s job” while the men who typically did them went off to war.  How many  “Rosie the Riveters” fell in love with welding, and didn’t want to give up the opportunity?

That picture reminds me every day that if we want to empower women in the maritime industry, we must create those opportunities—and then get out of their way. At Newport News Shipbuilding, we believe in starting early.

We have a program at the shipyard we call GEMS. The acronym stands for “Girls with Engineering Minds in Shipbuilding.” It is an after-school program geared toward middle-school-aged girls who are interested in pursuing engineering and other STEM careers. Female engineering mentors from the shipyard are partnered with the students to encourage college and career pathways and to help motivate the girls to excel in STEM-related classes.

This year we added a similar program for boys called Young Men in Engineering. Another example is a new development in Newport News’ Southeast community, an urban, low-income community not far from the shipyard that is undergoing its own transformation.

We have partnered with the City of Newport News and Old Dominion University on a new state-of-the-art facility within Brooks Crossing where we will implement new digital technologies into our engineering and manufacturing processes.

But the best part is the first floor of the building, which will be dedicated to introducing kids in the Southeast community to STEM-related jobs and fields of study. It’s a wonderful opportunity for us to grow and develop a new generation of welders, engineers, scientists and mathematicians…whose legacies are still unwritten, and whose futures are vast and unlimited.

And who knows, maybe one of them will have a portrait hanging at the shipyard one day.

Before I took this job two years ago, I didn’t really appreciate how much influence a leader has in his or her community. I think back to the presidents’ portraits and how each of those leaders has made his own mark on our company.

And I hope that when our future shipbuilders see my portrait among them, they see diversity…they see opportunity…and they see that the possibilities are endless. I hope that one day I will be known as the president who led our business through a period of transformation… from traditional shipbuilding methods and training to digital shipbuilding and modern workforce development.

When future shipbuilders look at those portraits, I hope they will not only see me as the first woman to hang on the wall, but, more importantly, they will remember me as the president who recruited them to help our company lead the way in the digital age of shipbuilding.

That’s the legacy I hope to leave.

I challenge all of us to think about how we are empowering the women in our lives—whether we are raising them or working alongside them—and what else we can do to create opportunity… and help ALL people realize their potential.

Because, like Bob Dylan sang in his famous song, the “old road is rapidly aging. Please get out of the new one if you can't lend your hand…For the times they are a-changin.'”