By Brian Cuccias, President of Ingalls Shipbuilding (as prepared) 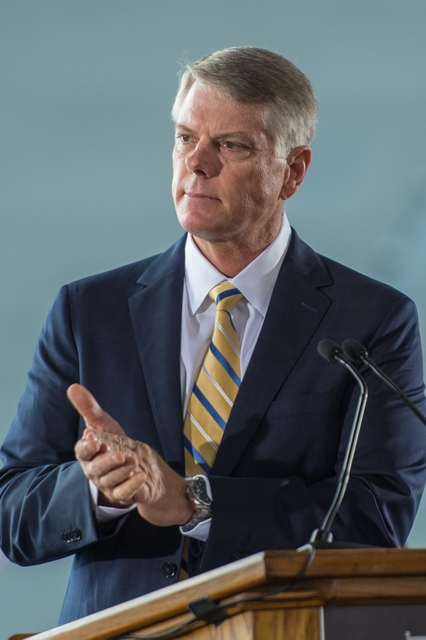 On behalf of all Ingalls Shipbuilders, welcome to the christening of the Amphibious Assault Ship, Tripoli LHA 7!

Good morning to you all!

We have a special group of veterans here with us today that I would also like to recognize.

The Armed Forces Retirement Home in Gulfport is home to 500 men and women representing all service branches. These residents have served in World War II, the Korean War and Vietnam and include recipients of the Bronze Star, Silver Star, the Lone Sailor Award, and the Congressional Medal of Honor.

And the average age of the residents is 82 years young.

Ladies and Gentlemen of the Armed Forces Retirement Home, please stand or give us a wave so we can thank you for your service to our country.

We are equally honored to have Mrs. Lynne Mabus, a Mississippian, here with us today serving as our ship’s sponsor.

Lynne is no stranger to Pascagoula as she often visited as a child to see her grandparents, who I understand worked at Ingalls. As her grandparents were, Lynne is also passionate about serving others. A trained trauma one nurse, she has volunteered with the Wounded Warriors at Walter Reed Medical Center and the Red Cross.

Mrs. Mabus was a frequent travel companion with her husband during his tenure as SECNAV, and made it a point to visit Navy and Marine Corps families around the globe.  A passionate advocate for our military indeed … and I know that as our ship’s sponsor she will be an advocate for this ship and its crew for years to come!

LHA 7 is the third Navy ship to bear the name Tripoli. The second Tripoli, LPH 10, was an Iwo Jima-class amphibious assault ship built by Ingalls in the 1960s.

With us today are former crewmembers of Tripoli. Would these crew members please stand and let us thank you for your service. LHA's are the most complex, survivable, conventionally powered Navy warships that are built in the world.

It is truly a floating city that moves, defends, and protects our nation, and can return home safely with our sailors and marines. When she is finished, the Tripoli will weigh 45,000 tons and will be 844 feet long; with almost 1,000 miles of cable--that is the distance from Pascagoula to Washington D.C., hundreds of thousands of feet of pipe and thousands of signals.

As a matter of fact, LHA 7’s hospital and medical facilities are significant- over 600 beds. As we stand here today, three of her sister large-deck amphibs are supporting relief and recovery efforts off the coast of Texas and Florida after those devastating storms.

You see, Tripoli is not only a warship built for our servicemen and women; but also for humanity! It will be a magnificent ship.  We have been building large deck amphibious assault ships at Ingalls for nearly a half century.

All Ingalls ships are built with one goal in mind: to protect the brave men and women who protect our freedom. Working closely with our Navy partner, we continue to improve on each ship we build. And the Tripoli will be no exception.

Today, we are investing hundreds of millions of dollars modernizing our facilities… alongside our partners, the leadership of the great state of Mississippi, of Jackson County, and of the City of Pascagoula.  Combine that with a hot production line and our talented and experienced shipbuilders …and we are uniquely positioned to provide our country with the highest quality, most capable amphibious assault ships in the fleet.

Our America-class program has an outstanding team of professional shipbuilders! Great American patriots like…

Arlin Richard, who in 1978 was working as a plumber for his grandfather when he was accepted as an Ingalls Pipefitter Apprentice. Early in his career, Arlin was assigned to work on USS Wasp (LHD 1), christened here in 1987, and he has worked on all nine large deck ships Ingalls has delivered since that time.  Arlin is now a Pipe superintendent, overseeing all of the pipe work on Tripoli.

And… Pete Serra, who has been employed by Ingalls for five years. He is a 2016 graduate of the Ingalls Apprentice School and was the Sheetmetal Apprentice of the Year. Just last month, Pete was promoted to a production control planner from a sheetmetal mechanic.  Pete and his family came to the United States from Sicily. Pete said, “I love this country, and I look at building these ships as a way to help our military. Building these ships with quality will help them protect all that we have here. I look at it as a way of serving.”

These are some of our LHA shipbuilders, true patriots - driven to produce the best ships possible for our Navy customer and for our great Nation.  They know that what they do today and every day truly matters for our Nation.

I would ask these shipbuilders, and all shipbuilders who have worked on, or supported LHA 7, to please stand so that we may show our appreciation for your work on this ship.

In closing, I’d like to thank you once again for joining us at this historic event. May God bless the officers and crew who will serve in this great ship.  And may God Bless America.  Thank you.