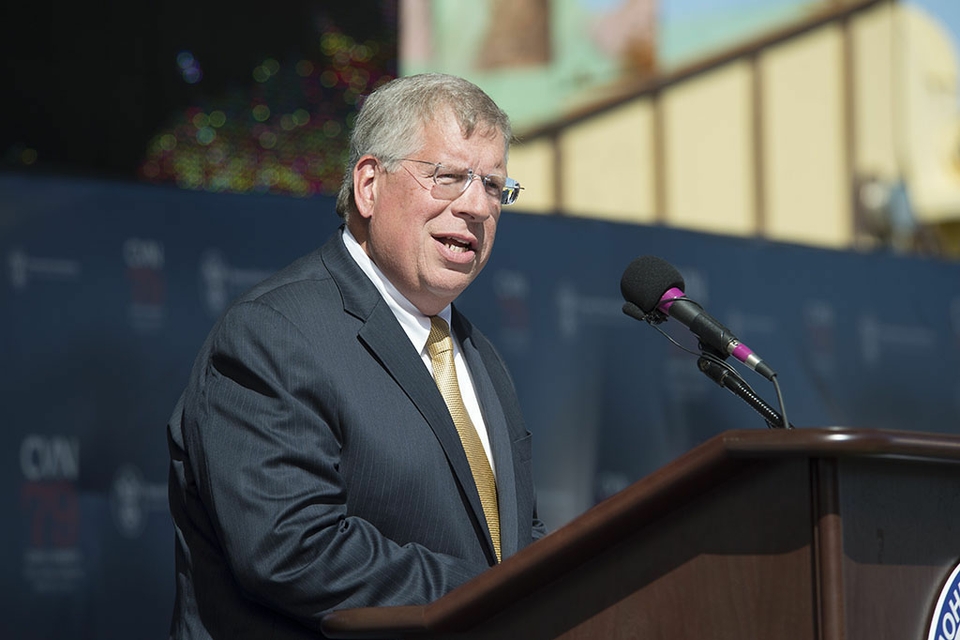 Distinguished platform guests, ladies and gentlemen, and especially Congressman Kennedy, who is attending on behalf of the Kennedy family, and his cousin Caroline Kennedy, our ship’s sponsor.  It is my privilege and great honor to welcome you to the keel laying ceremony for the aircraft carrier John F. Kennedy, CVN 79.

I would like to thank Donald Newsome for delivering the invocation, and to the U.S. Naval Sea Cadet Corps Color Guard, and the U.S. Fleet Forces Brass Quintet, for their roles in opening our ceremony today with such patriotic spirit. I would also like to offer my special thanks to Antuan Barnes for his performance of the National Anthem. Thank you all.

Today’s ceremony marks the first official construction milestone in the life of our nation’s newest aircraft carrier, and we are pleased you could all join us on this special occasion. There are a few guests in our audience today who I would like to specifically recognize.

There is another special group I’d like to recognize – many are with us today, and many are watching on the live webcast.  Would all of the former officers and crew of the first carrier to bear the name John F. Kennedy, CV 67, please stand to be recognized.

In his book Profiles in Courage, President Kennedy told the stories of eight U.S. senators who risked their careers to stand up for particular ideals or principles, even when they were pressured to bend.  In the foreword to his brother’s book, Bobby Kennedy said, “Courage is a virtue that President Kennedy most admired. He sought out those people who had demonstrated in some way – whether it was on a battlefield or a baseball diamond, in a speech or fighting for a cause, that they had courage – that they would stand up, that they could be counted on.”

Today, one of President Kennedy’s legacies is the Profile in Courage Award, which honors and celebrates individuals who do what is right, rather than what is expedient. When it comes to building nuclear-powered ships, it’s critical that our shipbuilders do what’s right. From the design to construction, and from outfitting to testing.  With every single weld made, every single piece of steel laid, and every single unit lifted, the right way is the only way.

The Navy sailors, the nation, and the world depend on the quality of these ships. The integrity, the courage, and the ethics that guide our shipbuilders—they’re not just talking points. They are not principles that we practice sometimes, or only when we’re here building ships. They are principles that we demonstrate inside the shipyard and outside the shipyard—at work and at home.

While this aircraft carrier that we lay the keel for today will serve as a tangible legacy of our nation’s 35th president, so, too, will the people behind the steel.  I’d like to tell you about just a few of them this morning. When we say the greatest shipbuilders in the world work right here, it isn’t just because we build the most sophisticated ships known to man. It’s also because of the way in which we build them.

Our shipbuilders demonstrate ethics, integrity and courage every day. Shipbuilders like Mike Horn. Mike is a technology specialist who ensures all the audio visual equipment works as it should during meetings.  In a recent training meeting, some of the attendees – who were from outside the company – were using smartphones to photograph the slides being presented.  This, after being told they couldn’t take pictures. Mike stopped the meeting and called security to examine and delete the photographs that were taken.

And then there’s Jerry Faison III. This past winter, during one of many snow storms, Jerry was home with his family when he and his wife noticed some boys outside playing around the pond behind their house in Virginia Beach.  Within minutes, one of the boys fell through the ice. “I immediately went outside and ran to where the boys were,” Jerry said.  “A few of my neighbors came out to help as well. One of the guys had a rope and we were able to pull the boy from the water.”

That most definitely took courage.

My last example is Kyle Westfall. Kyle is an apprentice who noticed that an instructor issued a higher grade than he actually earned. Even though his overall average may have been affected, Kyle spoke up and advised school administrators.

I share these stories with you today as examples of the rigor, the character and the strength behind the ships we build. Fittingly, this week was ethics awareness week for our corporation, but ethical behavior is something that is practiced each and every day at Newport News Shipbuilding.  This is the culture of our shipyard. It’s the culture of the nuclear navy. And it was the culture President Kennedy spoke about so often during his presidency.

In one of his most famous speeches about why the United States would go to the moon, he said, “We choose to go to the moon in this decade and do the other things, not because they are easy, but because they are hard.”  I dare say the same can be said about our shipbuilders. We build the most sophisticated, most lethal, most technologically-advanced nuclear-powered ships in the world.  And we do this, not because it is easy, but because it is hard.  Our shipbuilders have risen to the challenge for more than 129 years.  For that, I’d like to ask that all shipbuilders here today stand and be recognized.

Our quest for excellence was evident in 1964 when we laid the keel for the first JFK, CV 67.  And it holds true today.  This aircraft carrier, CVN 79, will continue our tradition of always good ships. Congressman Kennedy – we are honored to build this ship to advance the legacy of President Kennedy and the legacy of service by the entire Kennedy family.  We know CVN 79 will stand for strength, steadfastness and courage as it sails the world, protecting our nation for generations.