HII President and CEO Mike Petters speaks at the christening of the guided missile destroyer at Ingalls Shipbuilding in Pascagoula, Mississippi (as prepared) 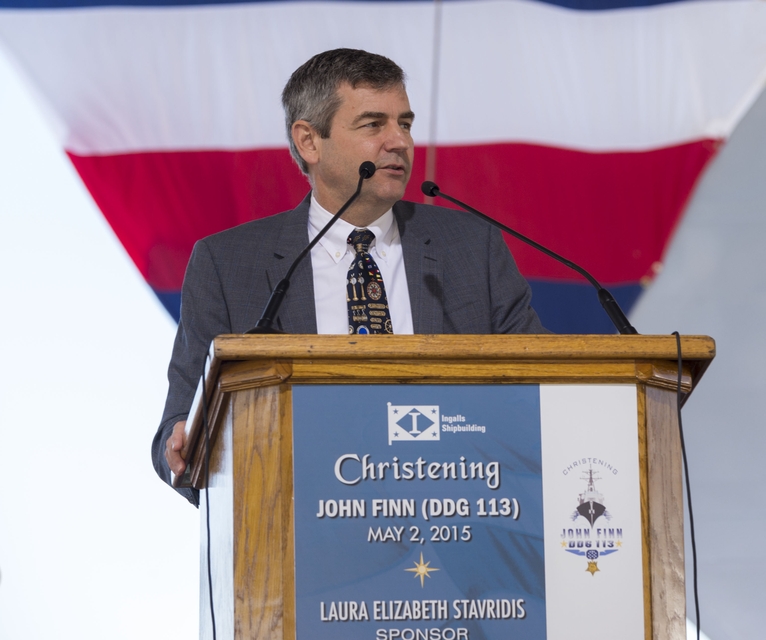 In 2009—about two months after his 100th birthday—John Finn downplayed the suggestion that he was a hero. In an interview with CNN, he said: “You gotta understand that there’s all kinds of heroes, but they never get a chance to be in a hero’s position.”

Finn’s actions on “a date which will live in infamy” were unquestionably heroic, yet his comment makes me think he would agree that anyone who volunteers for military service is heroic—and that sailing ships like this into harm’s way gives them a chance to be in a hero’s position.

And in the spirit that “there’s all kinds of heroes,” he might even agree that the men and women who build these ships are heroic in their own way. Laboring day after day, year after year, with little fanfare—all for the good of others.

Indeed: This is the humble life of a shipbuilder. And it’s the life for 11,000 men and women here in Mississippi and more than 23,000 at HII’s shipbuilding division in Virginia. I speak for every single one of them when I tell you we take great pride in building ships for the United States Navy, Marine Corps and Coast Guard. And we are very proud to be building John Finn, the 63rd ship in Arleigh Burke class of destroyers ... the 29th to be built at Ingalls … and the first to be launched and christened at Ingalls since the DDG 51 program was restarted.

Mrs. Stavridis, Admiral Stavidris, Representative Palazzo, MCPON Stevens, Admiral Aucoin, Mr. Thomsen, Admiral Gale, to all of the distinguished platform guests, ladies and gentlemen … Thank you all for being here today to commemorate another important milestone in the life of this warship and this shipyard.

To our sponsor, Mrs. Stavridis: Thank you for serving as sponsor of this ship and for your many years of service to Navy spouses and families. We’re all looking forward to seeing you christen John Finn and bringing it one step closer to commissioning.

Brian: Congratulations to you and the entire Ingalls team on reaching this milestone and the success of the DDG program. With this ship and three more in various stages of construction, you are proving the benefits of serial production and a hot production line … you’re improving cost and schedule performance with each consecutive ship … and you’re doing it while also building amphibious assault ships, amphibious transport docks and National Security Cutters.

Indeed: Ingalls is the only shipyard in the United States capable of building four ship classes simultaneously—leveraging this yard’s unique talent, experience and capabilities. And your hard work is being noticed. A few weeks ago, HII received the construction contract for DDG 121, which will be the 33rd Arleigh Burke-class ship to be built here at Ingalls.

Admiral Burke, the namesake of this class, served in the Korean War and World War II before serving as Chief of Naval Operations under Presidents Eisenhower and Kennedy. He once said: “There never is a convenient place to fight a war when the other man starts it.”

Few people knew this as well as John Finn, who was there on December 7th, 1941, and instinctively took action that would define him for the rest of his life. Finn outlived 14 fellow sailors who earned the Medal of Honor for their service in World War II. Unfortunately, he didn’t live long enough to know that a Navy ship would be named after him. I think he would be as humbled by this honor as he was with the title of hero bestowed upon him.

Just remember his words: “There’s all kinds of heroes.” And if you ask me, this ship was built for heroes by heroes. All in the name of freedom.

May God bless all of you. And may God Bless America.

Mike Petters at the Christening of John Finn