HII President and CEO Mike Petters encourages MGCCC graduates to 'Do your best work.' (as prepared) 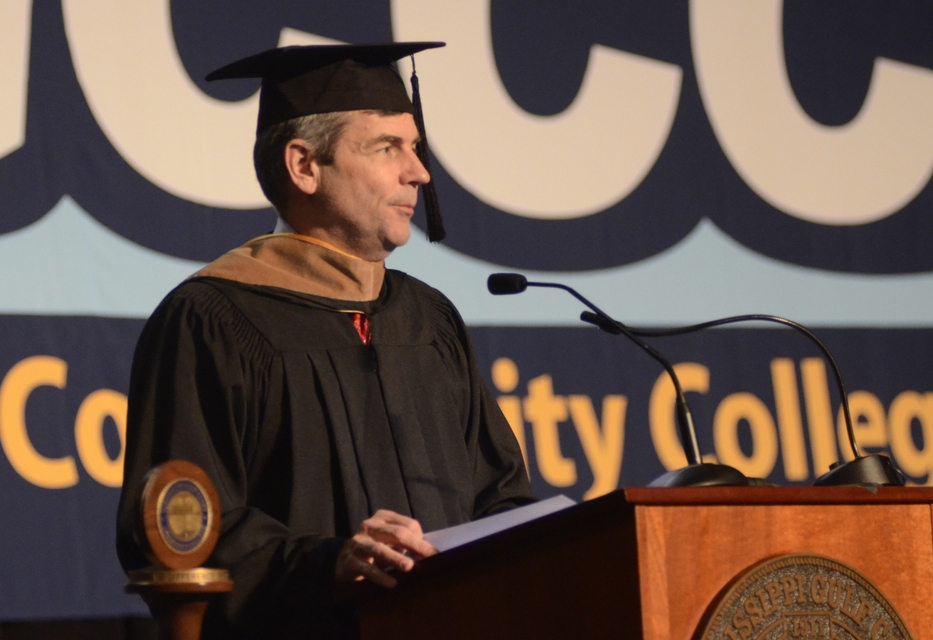 Thank you, Dr. Graham, Members of the Board of Trustees, faculty and staff, parents and family members, and of course, the graduating class of 2015.

What a wonderful Mississippi evening -- and I am so honored to serve as your commencement speaker and to join with you in celebrating this significant achievement!

Now tradition suggests that a commencement address should include some imparting of wisdom from the speaker to the graduates. As well as some inspiration. Those are two of my three goals.

I have a third goal too – and I think you’ll like it.It’s to be brief.

I am very sensitive to the fact that my remarks are one of the last things standing between you getting your diploma and beginning your well-deserved celebrations with family and friends. So without delay let me begin.

First, I want to thank Dr. Graham and the entire Mississippi Gulf Coast Community College system—your faculty and staff—for the important role you play in helping develop what is undoubtedly one of the strongest workforces in the country.

Look no further than HII’s Ingalls Shipbuilding division for evidence of your success. As long as Ingalls has been around—since 1938—we have relied on Gulf Coast Community College and its historical predecessors—to provide skilled employees to build the best ships in the world.

Hopefully, I can illustrate a bit of that success by sharing some stories about Gulf Coast Community College alumni who now work at Ingalls.

I’m going to talk about how they have used their community college education to put themselves in a place where they can do their best work. And I’m going to encourage you to do the same.

Let me begin with Johnathan Booth. He grew up in Lucedale and took a job at a fast food restaurant after graduating from high school.

“Twelve years is enough,” he told himself at the time. “I don’t want to go back to school.” But it didn’t take long for Johnathan to realize he wasn’t doing his best work. A year of minimum wage paychecks helped him to this conclusion. So he enrolled in the community college’s nursing program.

Even though he was doing well—he came to realize he didn’t have the right bedside manner to be successful in that field – to do his best work. He’s the first to tell you he can sometimes be very direct.

Guess what? In shipbuilding, we call that assertiveness and it’s a welcome attribute! So Johnathan switched fields and ended up graduating with an associate’s degree in electronics and instrumentation- and was soon hired as an electrician in Ingalls’ apprenticeship program.

That means he’s completing the trade portion of his apprenticeship, but with his Gulf Coast associate’s degree, he’s already placed out of the academic courses. In the last two years, Johnathon has worked on three ships: the Navy’s amphibious transport docks John P. Murtha and Portland and the Coast Guard’s National Security Cutter James. “My job really matters,” he said. “I know those ships are running because of me.”

Ashley Nguyen graduated from Gulf Coast Community College 20 years ago with an associate’s degree in drafting and design. Today, she works at Ingalls as a structural designer using 2D/3D computer-aided design programs.

If you recognize her name, it may be because she’s one of the “faces of Ingalls.” We featured her last year in a branding campaign called “Tougher Than Steel.” When you hear her story, you’ll understand why.

Ashley’s parents escaped Vietnam in a small boat when Saigon fell in 1975. A U.S. Navy ship took them in: her father, her brother and sister, and her very pregnant mother. Ashley was born on that ship two days later. She still doesn’t know what ship it was, but we like to think it was one that we built!

Her family settled in Ocean Springs and when Ashley earned her associate’s degree, she joined the Ingalls team. She says the Gulf Coast Community College helped her learn the fundamental skills she applies to her job every day: math, drafting and drawing. It was the other stuff—starboard means right, port means left—that she had to learn on the job.

Ashley was doing good work but she wanted to do even more so she went back to school to complete the design apprenticeship program. After 20 years in the yard, she says the accomplishment she’s most proud of is being involved in a ship’s design phase—seeing it develop from the very beginning.

“With 10,000 workers and 10,000 great minds,” she said, “it makes me feel proud and honored to build a Navy ship and to be in America.” Ashley, with the help of Gulf Coast Community College, is today in a place where she can do her best work.

Johnny Nungesser has worked at Ingalls for 34 years—a good 10 years longer than many of you have been alive. By the way, you might have noticed that the folks in these stories are getting progressively older. That’s one way you know I’m imparting wisdom.

Johnny’s father worked at the shipyard for 38 years, so you might think he was destined to follow in his footsteps or that his father’s position would have made it easier on him. Neither is true.

In fact, when Johnny graduated from high school, he went off to the University of New Mexico and worked in his uncle’s seafood restaurant. But he came back to Pascagoula after one semester because he was homesick. He continued a family tradition when he began working as a pipe welder in 1981.

He knew early on he wanted to have a career at Ingalls, yet he was lacking the knowledge and skills to get to what he calls his “first major growth step—from operations to engineering.” A drafting and design degree from Gulf Coast Community College changed that—helping him move from welding pipe systems to designing them.

Like Ashley, he also continued his education—earning a bachelor’s and master’s degree at Faulkner University in Alabama. Today, he is a director—responsible for the shipyard’s accuracy control, machinery and manufacturing services. Since he also oversees welding engineering, he says his career has come full circle.

Johnny said he is self-motivated and goal-driven. I’ve always looked at everything as an opportunity,” he said. Over time, though, his perspective has changed. While he started out working hard for himself, he later worked hard for his family. Now, he says, he’s also working hard for the benefit of the shipyard and the community. He wants to make sure the yard is here for the next generation and the one after that.

Johnathan, Ashley and Johnny are here tonight.  Would the three of you please stand? Thank you for helping to build some of the best ships in the world.

I promised to be brief, but if you’ll indulge me, I’d like to tell one more story. It’s about me.

Wherever I speak, the person introducing me almost always mentions that I graduated from the United States Naval Academy and I am very proud of this. Yet, the Naval Academy was the second college I attended—because I didn’t initially get an appointment. So I went to LSU – and I am also very proud of that – and then the Academy the following year.

Yet my education didn’t end there. In some ways it just started. Like Johnathon, Ashley and Johnny, I have constantly looked for opportunities to do MY best work.

Whether I was serving in the U.S. Navy -- or the submarine or carrier programs, contracts, or human resources department at Newport News Shipbuilding or serving as CEO of Huntington Ingalls Industries – I always looked for ways to do my best work.

I still do. It’s that desire to do my best work that really opened up more opportunities for me.

Today, I have the amazing opportunity to serve as the CEO of a Fortune 500 company with nearly 38,000 highly skilled employees, including hundreds of Gulf Coast Community College graduates. We are all committed to ensuring the success of our company and the communities where we operate – by doing our best work.

To the graduates of the class of 2015 - I hope as you’ve listened to these stories, you’ve thought about your own. About where you started and how far you’ve come.

Some of you probably graduated from high school and came right to Gulf Coast Community College as full-time students. Others might have taken some time off like Johnathon and worked your way through school part time. Some of you may have started at a four-year school like Johnny and come back because it wasn’t the right fit. Some of you might have come here from another part of the country—or, like Ashley, another part of the world—and decided that Gulf Coast Community College was the next step on your path.

You may have served—or are still serving—in the military. You may be raising kids. Or caring for elderly parents. Whatever your story, I have no doubt it has included some kind of challenge, and tonight is a celebration that you overcame it. And you should take great pride in knowing that you are well on your way to finding your best work.

I am certainly proud of you.

His remarks focused on the rebuilding effort after Hurricane Katrina, but his words about community colleges are timeless. He said:

I wish you all the best in realizing your dreams—and in finding the place where you can do your best work—wherever that may be.

Congratulations, and thank you. 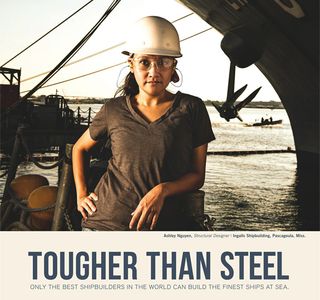 Ashley Nguyen, a structural designer at Ingalls Shipbuilding, was born at sea, aboard a U.S. Navy ship.  More at http://www.huntingtoningalls.com/about/tougher/ashley.html