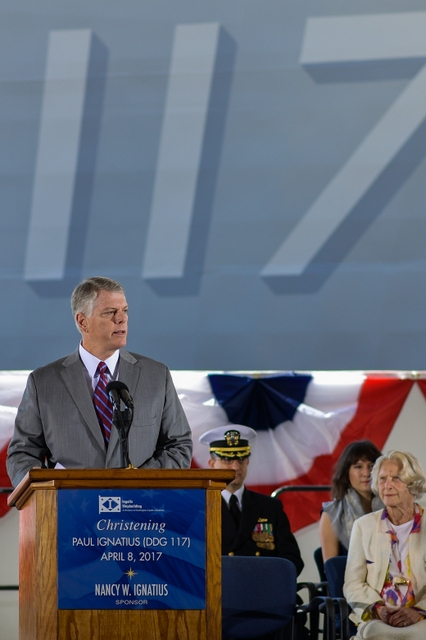 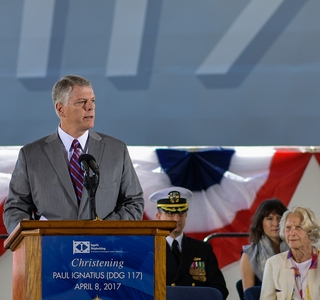 On behalf of all Ingalls Shipbuilders, welcome to the christening of the Arleigh Burke class destroyer, DDG 117 Paul Ignatius!

We also have a special group of veterans here with us today that I would like to recognize.  The Armed Forces Retirement Home in Gulfport is home to 500 men and women representing all service branches.

These residents have served in World War II, the Korean War and Vietnam and include recipients of the Bronze Star, Silver Star, the Lone Sailor Award, and the Congressional Medal of Honor.  And the average age of the residents is 82 years young.  Ladies and Gentlemen of the Armed Forces Retirement Home, would you please give us a wave or stand so we can thank you for your service.  I don’t know how they still wear their uniforms after all these years.

What a rare privilege we have this morning to have a ship’s namesake at a major milestone event.

It is my sincere honor to welcome to Ingalls DDG 117’s namesake, Paul Ignatius – a man who first-hand saw many of the critical events of the 20th century.

He was 18 years old in 1938 when Robert Ingalls, Sr. set the foundation for this shipyard. Our shipyard has been building ships for 79 years. Secretary Ignatius has been serving his country for almost as long.

He was a naval officer in World War II, during which he participated in the Battle of Leyte Gulf to liberate the Philippines. He served as Under Secretary of the Army under John F. Kennedy, Assistant Secretary of Defense and Secretary of the Navy under Lyndon Johnson.  He epitomizes the leadership and agility that has propelled our nation forward – and I couldn’t think of a better namesake for DDG 117.

What a life of service! Sir, thank you for being here.

We are equally honored to have Mrs. Nancy Ignatius, our namesake’s wife, as our ship sponsor. Nancy has been at the forefront of environmental advocacy for decades, a champion for environmental causes long before they became mainstream issues. She has worked as a subject matter expert with the U.S. Department of Energy and the EPA. A strong advocate for the environment. And I know she will be an advocate for this great ship too!

DDG 117, is the 31st Arleigh Burke-class destroyer built at Ingalls. We have 4 more under construction.  You can see destroyers are all around us. That makes a president very happy.

Ingalls ships are really built with one goal in mind: to protect the brave men and women who protect our freedom.  Working closely with our Navy partner, we continue to improve on every ship we build.

And the Paul Ignatius is no exception.

Today, we are investing hundreds of millions of dollars in modernizing our facilities, along with our partners, the leadership of the great state of Mississippi. Combine that with a hot production line, talented and experienced shipbuilders, and we’re uniquely positioned to provide our country with the highest quality, most capable destroyers in the fleet.  Simply stated, Ingalls builds the finest warships the world has ever known, right here in Pascagoula, Mississippi.

Our Aegis destroyer program has an exceptional team of professional shipbuilders!

… great American patriots like Lisa Avery -- an electrical foreman working on this ship. She and her crew have achieved something remarkable – they’ve worked more than 850 days without a recordable accident. 850 days and counting. And there’s a rumor out there that if she reaches 1,000 days, someone owes her a steak dinner. I think that’s right, George. Lisa attributes this record to the sense of urgency her crew brings to the job every day. They make safety their top priority – It is embedded in their culture.   Well done, Lisa!

… and like Bill Jones, Hull Superintendent in our Integrated Products shop. A nearly 30-year shipbuilder, Bill began his Ingalls career as a shipfitter. In his current role, he oversees production of the highly specialized sonar dome that’s integrated into this magnificent hull. Before joining us at Ingalls, Bill served in the United States Marine Corps, and is one of more than 1,400 proud military veterans who are now part of Ingalls shipyard and we are proud to call our coworkers.

These are just a few of the thousands of Ingalls Shipbuilders who build finest ships the world has ever known.  I would ask that these shipbuilders and all the Ingalls shipbuilders please stand and be recognized?

In closing, I’d like to thank you again for coming to this historic event. May God bless the officers and the crew that will serve in this ship and protect our Nation.  And may God Bless America.  Thank you.

Brian Cuccias Speaks at the Christening of Paul Ignatius (DDG 117)