The Art of Investing In Our Future

By Mike Petters, president and CEO of Huntington Ingalls Industries (as prepared) 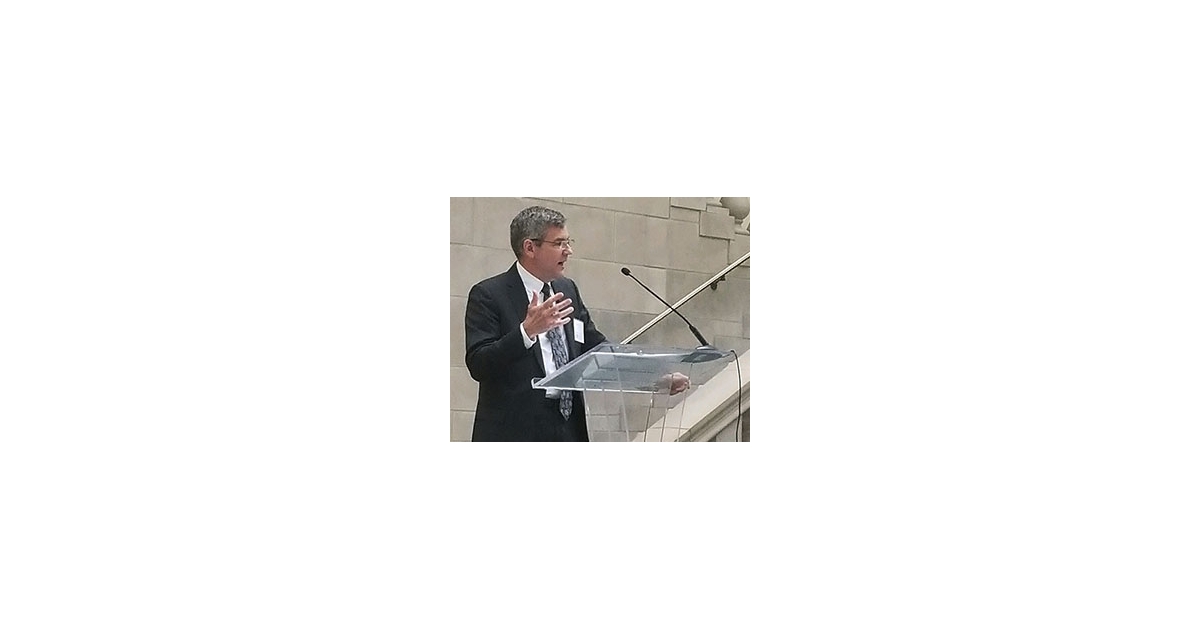 And thank you to the Corporate Leadership Alliance for hosting this wonderful event.

Mike Petters speaks at the Chrysler Museum of Art on March 19, 2018. HII photo

If you know nothing else about Huntington Ingalls Industries, you probably know that we build aircraft carriers and submarines for the United States Navy at our Newport News Shipbuilding division just across the harbor.

One of the two aircraft carriers we’re currently building is the second to bear the name of President John F. Kennedy, a renowned supporter of the arts.

“To further the appreciation of culture among all the people.
To increase respect for the creative individual,
to widen participation by all the processes and fulfillments of art—
this is one of the fascinating challenges of these days.”

I think we would all agree that the challenge still remains.  That’s one of the many reasons HII is proud to join all of you in supporting the Chrysler Museum.

I should tell you that HII owns a second shipyard—Ingalls Shipbuilding in Mississippi—and that we also have a year-old Technical Solutions division with an office a few miles from here in Virginia Beach.

When you think about our company, you probably don’t think about art. But 23,000 of our 38,000 employees live and work in Hampton Roads and benefit from wonderful cultural institutions like this.

And if you saw Glen McClure’s photography exhibit here last year, you know that some of our Newport News employees were featured.

Whether they’ve been here or not, I would guarantee that every single one of our employees has been moved by a work of art—whether it was a painting or a piece of music or a play or a dance performance.

But I’m not here today to convince you of the merits of supporting the arts. What I really want to talk about is education. And more specifically: pre-school education.

Fortunately, this museum does an exemplary job of engaging children—exposing them to the arts and getting them involved with hands-on activities. Three times a year, the museum hosts Family Days with themed performances and interactive arts and crafts.

Of course, thanks to free admission every single day of the year, any day you come to the museum with children could qualify as a “family day.”

And the museum’s educational facilities—including the Diamonstein Education Workshop and the Margaret Shepherd Ray Student and Family Gallery—are wonderful resources that build not only a love of art, but a love of learning.

And those experiences—no matter how small they may seem—have the potential to change a life. If you need evidence, look no further than the story of Parker Curry.

Just two weeks ago, a photo of the 2-year-old standing in front of the portrait of Michelle Obama at the Smithsonian National Portrait Gallery went viral.  And Parker was invited to meet the former First Lady. Parker’s mom, Jessica, wrote in The New York Times a week ago today:

“We are lucky to live in Washington where most museums are free. As a family, we go often. And although Parker has been to the National Portrait Gallery and I have taken her to numerous other galleries and museums in the city, I have never seen her as captivated as she was when she was looking at Amy Sherald’s portrait of our former First Lady. I called her name repeatedly trying to get her to turn around so I could take a photo of her looking at the camera, with the large painting as a backdrop, but she was motionless, completely absorbed in the grandeur of the image.”

There are a lot of take-aways there, but I’ll start with the two big ones:

With the same elements in place here in Norfolk, I can’t help but think that sense of awe happens—with a little less fanfare, mind you—every time a child comes to the Chrysler Museum.

This commitment to early education aligns perfectly with HII’s business strategy, so when I think about our investment in the Chrysler Museum, I think of these programs. And as someone deeply invested in workforce development, I see that as the foundation of a strong and adaptable workforce of the future.

Why am I so interested in education?  Because someone—actually, several people and organizations—reached out and helped me with my own education, changing the trajectory of my life.

I grew up on an orange and cattle farm in Florida, the oldest of six children. When I was in the eighth grade, my parents encouraged me to take the entrance exam for a Jesuit high school that cost well beyond their means—and was located 40 miles from where we lived.

Not only was I accepted, I earned a scholarship to work off half the tuition by cleaning classrooms and doing other odd jobs around the school. I saved up the rest from my wages from working on my dad’s farm in the summers. And because I attended that school, my path was forever changed.

Those opportunities—that access to a really good education—were instrumental in my life. I’m sure there are many in this room today with stories of your own.  For me, it’s the reason why I spend so much of my attention on education.

And as I’ve gotten older—and hopefully wiser—I’ve directed more and more of my attention to the beginning of the workforce development pipeline: early education. Let me explain why.

The OECD, the Organisation for Economic Co-operation and Development, reports that investment in early childhood education in the U.S. is relatively high—fifth among OECD countries—yet enrollment rates for 3- and 4-year-olds continue to be considerably lower than average.

Because even though the U.S. is fifth in investment in early childhood education, overall America is tied with Italy in the 28th position for OECD global rankings for overall education quality.

As business leaders, we see the consequences down the line, and that’s a shrinking pool of applicants years before traditional workforce development efforts even begin.  If you talk with educators, they will tell you that, by the third grade, the academic path of the student is pretty well defined.

If you’re not reading at grade level by third grade, it gets to be really challenging, if not impossible, to catch up.

Today, you can go into a fifth-grade classroom and think: “One out of four kids will be employable. We’ll have to pay for the other three.”

Pre-school is our chance to change the future for those three students. Pre-school can help boost the chances of those three children to succeed because they start to learn earlier.

For us to keep our economy strong and to remain competitive on this global stage, we must invest in education at all stages of the pipeline—from the very beginning all the way through college.

To make all of this relevant to today’s conversation, I would suggest that:  Art can be the thing that triggers a child’s love of learning.

Full disclosure: My wife is a pre-school teacher, and both of our daughters have spent time teaching in the classroom, so they see the challenges up close.

In fact, our eldest daughter is currently getting her PhD in school psychology—and two years ago she provided us with our first grandchild!  So yes, now I’m Grandpa Mike.

And I have to tell you …  When I hold my granddaughter and look into her eyes, I become even more determined to help make a difference for others.  I want to help keep the American Dream alive for her generation and the ones that come after. I want to do whatever I can do to keep this world safe for her and for future generations.

This is why HII invests in pre-school education.  This “long game” philosophy extends to most—if not all—of our business decisions.

Two years ago, we launched the HII Scholarship Program.  In addition to awarding post-secondary scholarships to children of HII employees, we award scholarships of up to $3,000 toward pre-school readiness education costs.

It’s also why we’ve opened Family Health Centers at our two shipbuilding divisions.  The centers provide easy and affordable access to health care, but the emphasis is on preventive care. It’s an investment in our current workforce, but also in future generations of shipbuilders.

We are also involved in the Virginia Chamber of Commerce and the development of its “Blueprint Virginia 2025,” a plan of action to ensure that we are the best state in the nation for business.

Jennifer Boykin, the president of our Newport News Shipbuilding division, is a lead author of the Blueprint, and Bill Ermatinger, our chief human resources officer, chaired the workforce and education team.  The Blueprint includes seven recommendations to strengthen early childhood education.

Here are the top three:

Now back to the arts … You hear a lot about STEM education these days—science, technology, engineering and math. As a heavy manufacturing and engineering company, we certainly see the need in developing these skills early, and we invest accordingly.

But there is a compelling case to include arts in the equation.  The advocacy group Art in Action reports that “putting the ‘A’ into STEAM best prepares children with the skill set they will need to become successful, well-rounded thinkers.”

It cites creativity, collaboration, confidence and critical thinking as skills students learn through an arts education.  While those are certainly important in any business, including ours, it’s a fifth critical skill—cultural awareness and empathy—that may be the most valuable.

“The arts provide a unique platform to discuss many different cultures, socioeconomic levels, and current events. Through the arts, students have a place not only to learn about different cultures than their own, but also to ask questions and be more informed about the daily struggles and realities of people who may seem different. By learning about other people, children are able to develop their ability for empathy, essential in working with people from all walks of life, and realize that we have more in common than not.”

Of course, this applies not just to children. Earlier this year, HII hosted a leadership meeting in Atlanta. More than 300 of our vice presidents and directors came from all over the United States.

We were there for three days, and on the last night, we hosted a dinner and guest speaker at the Fernbank Museum.  Many of you have probably been there.

It’s not an art museum per se, but it features an amazing collection of cultural artifacts that helped us set the scene for an important discussion about diversity and inclusion.  Most of them would probably tell you that was the most enlightening and motivating part of the trip.  Our hope is that it inspired them to return to their day-to-day jobs with a greater appreciation for the diversity of their teams and their ideas.

Along those lines, let me close with another quotation from President Kennedy.

The Chrysler Museum certainly helps us achieve that vision.  What is even more noble—to me, at least—is the museum’s emphasis on engaging children—especially pre-schoolers—in achieving that “long game” vision.

So thanks to the Chrysler Museum for your efforts—and to all of you in the Corporate Leadership Alliance for enabling it.  And keep up the good work!