By HII President and CEO Mike Petters (Remarks as prepared) 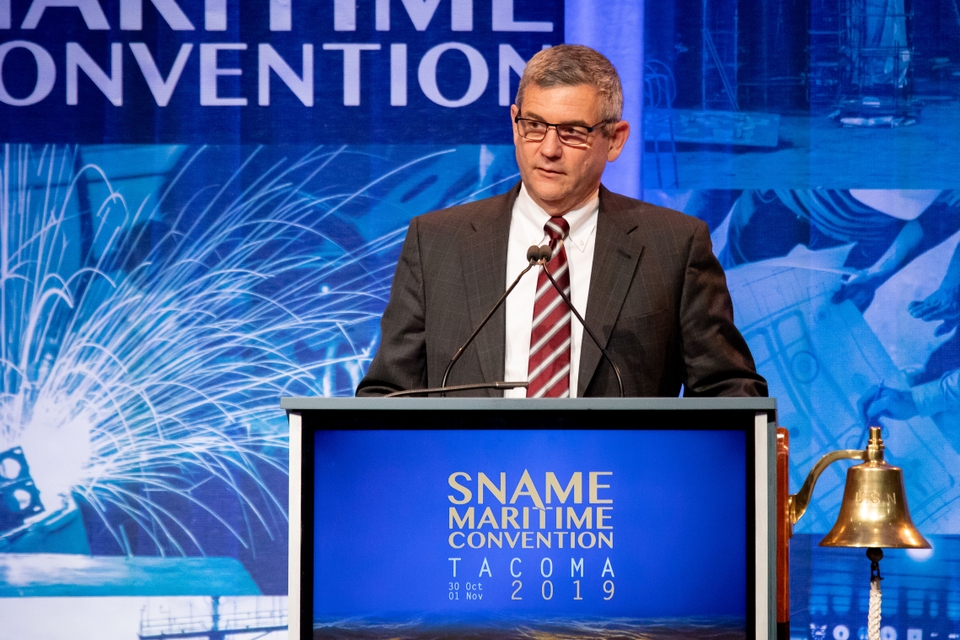 Thank you, Nancy.  And thank you to SNAME for hosting this wonderful event.

This is a very special opportunity for us. I’ve spoken many times about education and workforce development, but this is the first time Nancy and I have shared the stage.

I hope I’m at least half as good as she was. Those of you who are familiar with Huntington Ingalls Industries may know that our company motto is “Hard Stuff Done Right.”  It’s broad because we welcome all challenges—from nuclear shipbuilding to addressing a problem like education.

Yet even with that context, some of you may be wondering: Why is HII’s CEO interested in education—and especially early childhood education?  Well, I think everyone should be interested, but I have three answers that are relevant to HII.

The first is workforce development.

While Wall Street looks at us as an aerospace and defense company, I view HII as a workforce development company.  We employ more than 41,000 men and women in 42 states and in 13 countries around the world. That includes more than 200 employees here in Washington—in Bremerton and Richland.  Maintaining a workforce of that size requires us to invest in all parts of the workforce development pipeline, including the very beginning.

My second answer is closely related to the first: We play the long game.

At HII, we have what I would argue is the longest horizon of any company in the world. Right now, we have a 40 billion dollar backlog of work. That includes a contract for two aircraft carriers—the second of which will sail the seas until the 2080s.

Most companies don’t have the ability or the resources to step back and take a long view.  They’ve got to survive this week … this month … this quarter. That goes against who we are at HII—and who we have been for more than 130 years.

The third answer is the most important and, frankly, the reason we should all be interested in education: national security.

The ships that we build in Mississippi and Virginia represent the best of America in every way. Think for a moment about the vision, the imagination, the technology, the skill, the will and the tens of millions of labor hours required to build Navy ships. Their hallowed purpose: never to sail on a mission of conquest, but always to keep the seas open and the world stable.

Our fleet represents our commitment to invest in, believe in and prepare for the national security future of America. This is the very commitment we need to make for the future of children here and all around the globe.

While the ships we design and build are engineering marvels, their power is not embedded in technology or weaponry.  The power of our ships will come from the young men and women—average age of 19—who will take them around the world, wherever needed.

That’s the “talent pool” from which the Navy and other services are recruiting. When I heard that, I thought: That’s who I’m recruiting too.  But it gets worse. More recent Pentagon surveys actually put the number at 20 percent.  One in five … That is a staggering indictment.

The Pentagon’s latest National Defense Strategy states that we are in a “near peer” competition with China and Russia. Think about going into a competition with only 20 percent of our capabilities to bear. That’s something we should ALL be concerned about.

Now take those odds to an elementary school classroom. Only one in five students will ultimately be employable. The other four will face challenges that, frankly, we all will pay for.

Those of you who are engineers—and even those who aren’t—know that the earlier you can find and fix a problem in the value stream, the more successful you’ll be.  The problem will also be more affordable to solve than if you find it at a later phase.

I would tell you the same holds true for education. But this isn’t a problem we can wait for government to solve. Every leader in business and industry who is looking for the best and brightest of tomorrow must join the fight.

Granted, for businesses to invest in pre-school education, we have to be willing to be patient about any specific return on investment. We have to really be making the investment for the “greater good,” so to speak. And that may be a hard truth for some to believe.

Especially if you, like me, did not go to pre-K or even kindergarten.  I didn’t start school until first grade myself. For most of us who didn’t go, it’s because we didn’t HAVE TO.  For me it was more than 50 years ago.

The work environment was a different place and, indeed, education was different than it is today.  We didn’t know about how the brain developed at such an early age like we do today.

Today, it’s less about local competition and more about global competition. We know the world is starting earlier.  Some of you at this convention are from other countries and can attest to that. To stay competitive, so should we.

The bottom line is that in today’s economy—in today’s society—pre-K is critical to the U.S. being able to deliver the product of a globally competitive education.  As Nancy said: We have to foster a love of learning—before kindergarten.

For now, my call to action is for you to ask yourself:

I am asking you to please step up and take a leadership role in this very important issue.  We need you.

You know the slogan: “Think globally, act locally?” You drive the effort to lay the groundwork for school success and a more prosperous community.

We may feel like we’re giving something to these children. But the truth is they will give us infinitely more in return.  And remember: This is a national security issue.  And it’s something we must address today for our nation to remain strong tomorrow.

Early education for all can get us there.  It’s personal.