By Mike Petters, HII president and CEO (as prepared) 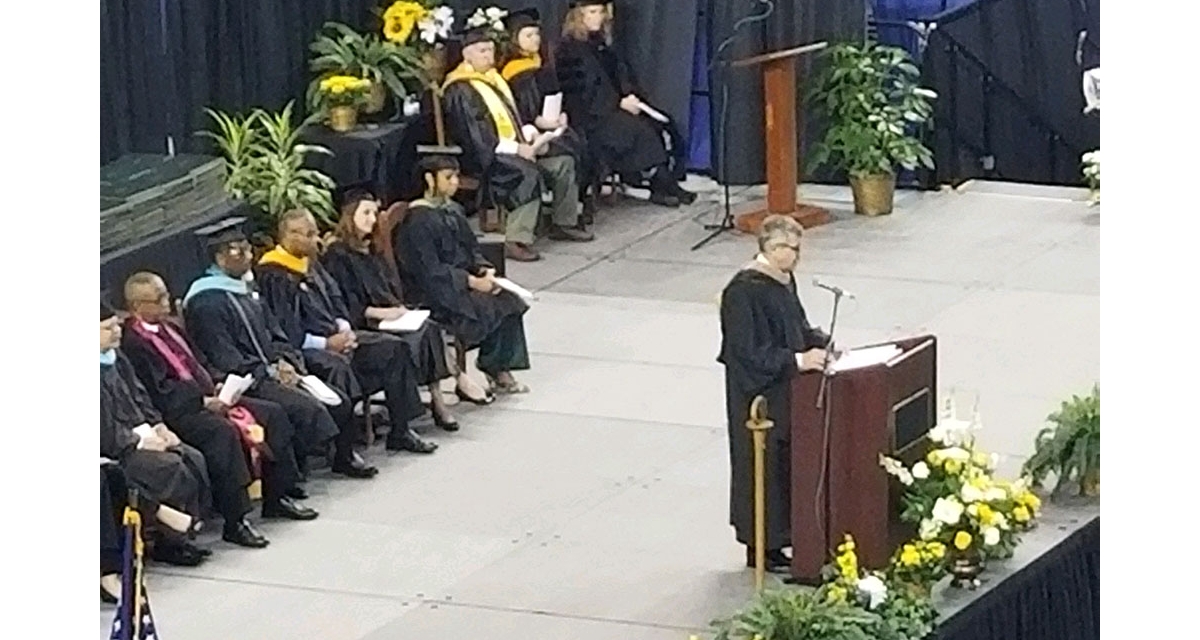 Thank you Mr. Upshaw. Faculty and staff …Family members and friends …And, of course, the graduating class of 2018.

Three of whom also work at HII.

Bringing the number of HII employees with St. Leo degrees to nearly 500. Which is just one of the reasons why I am so pleased and honored to be able to share this time of celebration with all of you.

I’ve spoken at a few commencement ceremonies over the years, and I’ve learned that these speeches are best when they have three qualities:

They impart a little bit of wisdom …They inspire … and most importantly…They are brief.

Since humor is also a desirable quality, I’ll share this with you:

Unless it’s a president or a celebrity, most people don’t remember who their commencement speaker was, so I don’t expect you to remember me five years from now … Or even five days from now.  I won’t say five hours from now, but I do expect you to enjoy your well-deserved celebrations this afternoon and tonight.

That said, I have to tell you: I will remember speaking to you.

You see: My family has a connection to St. Leo that dates back to the 1950s.

My father, Clem Petters, graduated from the historic Saint Leo Prep School. He was proud of his St. Leo education, and he loved Florida.

He and my mom, Joan, settled there and raised my five siblings and me on an orange grove not far from the original campus. Our family connection is strong enough that my sister, Susie, and I were invited to speak at St. Leo’s Florida commencement in 2014.

It was an emotional day for both of us. I talked about our parents and how they instilled in us a love of education.

I encouraged the graduates to build something, and I explained that:

“The most important things you build will not always be tangible in the physical sense of the word. Because it’s relationships with the people in my life—past and present—that truly changed who I was—and who I wanted to be—even if I didn’t realize it at the time.”

Susie talked about our parents and encouraged the graduates to be “doers.”

“Set a goal,” she said. “If you don’t, you’ll never reach it. You’ll only WATCH opportunities come and go.”

She’s a brigadier general in the United States Army, so she might have been a little more convincing than me when she said it.

Today, I’m going to talk about our dad again, but I want to do it in the context of service. As I said, he loved living and working in Florida. But more than anything, he was proud to live in the United States of America.

And one of the things he instilled in us was the thought that we are darn lucky to live in this country and that we need to pay it back through service. In my dad’s view, that meant military service, and my siblings and I took it to heart.

I mentioned that my sister serves in the Army. In fact, all six of us would go on to serve in the military. I went to the United States Naval Academy and served active duty for five years and then another five in the Reserves.

When I left the Navy, my wife and I—and our first daughter—moved to Virginia, and I got a job at Newport News Shipbuilding. That was 31 years ago.

In the meantime, I was fortunate to be able to continue my education—earning an MBA at the College of William and Mary—and developing through various leadership positions in the shipyard.

Seven years ago, we formed Huntington Ingalls Industries.  Since then, I’ve had the amazing opportunity to serve as the CEO of a company with 39,000 highly skilled employees, including hundreds of St. Leo graduates—not only here in Virginia, but all over the country.

But that’s only part of my story.

While I’m proud of my education, my military service and my career with Newport News and HII, I’m equally proud of the work my family and I do in the community.

We are active in our church. We are advocates for the Downtown Hampton Child Development Center. We support An Achievable Dream’s education programs in Newport News.

And at my company we established the HII Scholarship Fund, helping employees’ children attend two- and four-year colleges and also pre-K education programs.

These are just a few of the many ways we give back and try to create opportunities for those who may be less fortunate than we are.

It’s also one of the ways I honor my mom and dad and many others who helped me along the way.  I would tell you that “seed of service” was planted in St. Leo, Florida, long before I was born.

I agree with my dad that we are lucky to live in this country. And my reason for believing this is not that much different from his.

I believe we’re lucky to live in this country because—for all that has happened in the 60-plus years since dad graduated with his class—we still have that same opportunity. In fact, we have the chance to do so much more.

It’s a uniquely American characteristic to believe that we—both as individuals and as a nation—can make the world a better place.

It’s a uniquely American characteristic to believe that we can make things better for ourselves and, more importantly, for someone else.

You can make things better.  Many of you already have and continue to do so.

It’s no coincidence that service is such a fundamental part of the St. Leo experience.

The description for the “Community” value says, in part:

“We foster a spirit of belonging, unity and interdependence based on mutual trust and respect to create socially responsible environments that challenge all of us to listen, to learn, to change and to serve.”

It’s also reflected in the student body, which is nearly 40 percent active duty military and veterans.

If you’ve never been to the Florida campus, I have to tell you there is a beautiful sculpture there called “For Those Who Serve.”

It honors the five branches of the military and commemorates the university’s 45 years of educating the men and women of our nation’s armed forces. Of course, service isn’t just about being in the military or working for the government.

It’s about helping someone who needs it …

It’s about making your community better for everyone who lives in it.

“Life’s most persistent and urgent question is: What are you doing for others?”

And 1,500 years before MLK, it was Pope Leo—the namesake of your school—who said:

“Those who are not good to others are bad to themselves.”

Six and a half miles from here, thousands of men and women at HII’s Newport News Shipbuilding division are building a new aircraft carrier named after President Kennedy, so we actually think about him a lot right now.

While we’re all familiar with his famous quote, there are many others where he spoke in greater detail about service.

Here’s one from September 1963—less than two months before he was killed.

He told students at the University of Wyoming:

“I hope that all of you who are students here will recognize the great opportunity that lies before you in this decade, and in the decades to come, to be of service to our country.

“The Greeks once defined happiness as full use of your powers along lines of excellence, and I can assure you that there is no area of life where you will have an opportunity to use whatever powers you have, and to use them along more excellent lines, bringing ultimately, I think, happiness to you and those whom you serve.”

I promised to be brief, so I’ll finish now by reminding you that “commence” means to begin.

In other words: While you are earning degrees today, and it might seem like the end of a long road, it is the beginning of another.

I hope you will recognize the great opportunity that lies before you and use whatever powers you have to bring happiness to those you serve.

Again, Congratulations.  And thank you.