Remarks by Mike Petters, president and CEO of HII (as prepared) 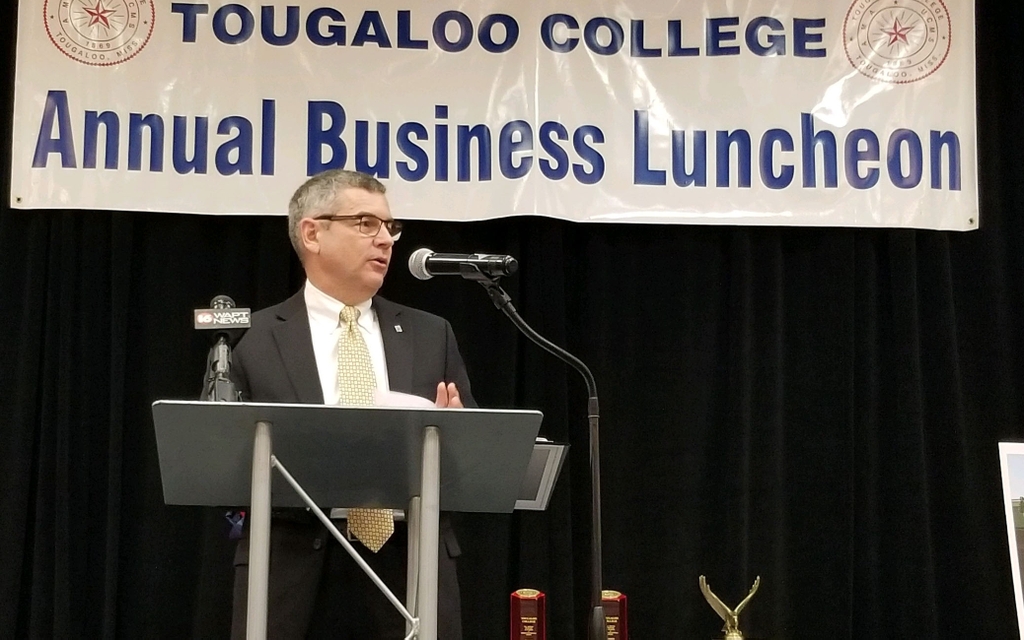 It’s an honor for me to visit your alma mater—this hallowed historic ground—and to have the opportunity to speak with all of you today.

And I am so pleased to have one of HII’s own here with us today. That would be retired General Augustus Collins.

He now serves as the CEO of MINACT, a Mississippi-based contractor that supports the Department of Labor’s Job Corps program. General Collins is a champion of Mississippi, of our nation’s military and of the critical need for education and workforce development.

And I’m proud to say he’s been a member of HII’s Board of Directors since 2016.

Thank you for being here today!

I’m here to talk about workforce development …And specifically about early childhood education, which might seem unusual at an institution of higher learning.

But it makes sense to me, given Tougaloo’s early legacy as a teacher training school and its lasting mission to educate “for the benefit of our citizens in general.” I also think about early childhood education from the perspective of Tougaloo’s next incoming class.

You see, all over Jackson, all over Mississippi—indeed, all over the United States—17- and 18-year-olds are anxiously awaiting college acceptance letters to come here … or Jackson State … or Belhaven … and to hundreds of other American colleges and universities.

Thanks to a lifetime of conditioning, they believe their future success depends on it. But science tells us that their success was largely determined seven years ago—by the time they were in the fifth grade.  And I would tell you that the indicators were already apparent by the time they started kindergarten.

You see, at Huntington Ingalls Industries, a Fortune 400 company that builds military warships and is the largest manufacturing employer in Mississippi—we strongly believe we must do more to invest in the beginning of the workforce development pipeline.

When the amphibious ships, destroyers and National Security Cutters we build in Pascagoula sail the globe, protecting us and our nation’s interests, they represent America’s industrial strength and economic prosperity.

They represent the talent and will of thousands of people who design, build, test and maintain them. And most importantly, they represent the best and the brightest who sail them, and who, if needed, sail them into harm’s way to defend our democracy.

Because of these attributes, these ships are also a statement about what makes America globally competitive.  And part of what enables us to build these ships and have them crewed by our nation’s finest is the investment we make in education—starting at the very beginning.

A few years ago, I heard then-Secretary of the Navy Ray Mabus—your former governor—talk about the service’s recruiting challenges.

That’s the “talent pool” from which the Navy and other services are recruiting. When I heard that, I thought: That’s who I’m recruiting too.

One in four is a staggering indictment. Now take that to an elementary school classroom.

One in four students in that classroom will ultimately be employable. The other three will face challenges that, frankly, we all will pay for.

Ask any pre-school educator, and they will tell you they can predict which of their students will be successful by how they learn in the classroom even at that early age.  So pre-K schooling is not only A solution … it is THE solution that can change the future for those students.

Last November, I was honored to participate in ReadyNation’s Global Business Summit on Early Childhood.  ReadyNation, a part of the Council for a Strong America, promotes public policies and programs that build a stronger workforce and economy.

Because its members—more than 2,000 business executives—know that early childhood education can predict a child’s success in the job market.

A large part of the problem is that public education—in most of the United States, at least—doesn’t begin until a child is 5, and some parents will even “red shirt” their children until they’re 6.

The Organisation for Economic Co-operation and Development or OECD, is a member organization made up of 36 countries around the world whose mission is to promote policies that will improve economic and social well-being for people around the world.

The OECD shows that only 91 percent of 5-year-olds in the U.S. are enrolled in school. That’s just below the OECD average of 95 percent.

But the data is even more alarming for 3- and 4-year-olds. In the U.S., only 38 percent of 3-year-olds are enrolled in a pre-school program. The OECD average is 75 percent.

And only 67 percent of 4-year-olds are enrolled in a pre-school program. The OECD average is 88 percent.

The problem only gets worse over time. Educators will tell you that children who are not reading at grade level by the third grade are lost.

At HII’s shipyards, we know that the earlier you can find and fix a problem in the value stream, the more successful you’ll be. The problem will also be more affordable to solve than if you find it at a later phase.

The same holds true for education.

And any educator will tell you that it’s much preferred—with a higher chance of success—to prevent problems at the beginning of a child’s education than in the middle or especially toward the end of secondary school.

This is where the discussion shifts from strictly educational issues to socioeconomic ones—like cost and accessibility. When you consider the cost of child care and early education versus the median income in Mississippi, I think we can agree the barriers are high for a family with two working parents and one child.

But what if you add one … or two … or three more children?  What if one of the parents doesn’t work? Or what if it’s a single parent—which, according to data from the organization Kids Count—is the case for 44 percent of the families in Mississippi …

And what if they’re living in poverty, which Kids Count reports is the case for 27 percent of the families in Mississippi?

We see the consequences down the line, and that’s a shrinking pool of applicants years before most workforce development efforts begin.

Layer on to all of this the fact that there is a teacher shortage in Mississippi, especially among African-American students.

According to a recent Mississippi Title II (TWO) Report, Mississippi’s 15 colleges and universities produced over 300 fewer traditional route teachers than they did just three years prior.

The trend is even more significant at the pre-K level, due in large part to the fact that Mississippi remains the only state in the south—and one of 11 in the country—that does not fund any pre-K programs. Those of us who are deeply committed to education and workforce development know this is not just a social problem.

This is also an economic problem, and framing it this way should bring us together to work toward solutions. To my colleagues in the business community: We can—and should—take a leadership role. And we should work with government and education to do so.

I’ll use HII as an example.

At Ingalls Shipbuilding, Denise Jones serves on the board of Excel By 5, a community-based program that emphasizes the important roles communities play in educating their children during their most formative years.

At our Newport News Shipbuilding division, we contribute every year to Smart Beginnings and the Downtown Hampton Child Development Center, one of the highest-rated child care facilities in the state.

And Bill Ermatinger, HII’s chief human resources officer—and a close colleague of Edmond’s—serves as chairman of the Virginia Early Childhood Foundation’s board of directors.

Two years ago, we launched the HII Scholarship Program. In addition to awarding post-secondary scholarships to children of HII employees, we award scholarships of up to $3,000 toward pre-school readiness education costs.

Granted, for businesses to invest in pre-school education, we have to be willing to be patient about any specific return on investment.

We have to really be making the investment for the “greater good,” so to speak. And that may be a hard truth for some to believe.

Especially if you, like me, did not go to pre-K or even kindergarten. I didn’t start school until first grade myself. For most of us who didn’t go, it’s because we didn’t HAVE TO.

For me it was more than 50 years ago.

The work environment was a different place and, indeed, education was different than it is today. We didn’t know about how the brain developed at such an early age like we do today. Today, it’s less about local competition and more about global competition.

We know the world is starting earlier. To stay competitive, so should we.

The bottom line is that in today’s economy—in today’s society—pre-K is critical to the U.S. being able to deliver the product of a globally competitive education. We have to foster a love of learning—before kindergarten.

So whether you represent business, government, schools, parents, child care providers, faith communities—you drive the effort to lay the groundwork for school success and a more prosperous community.

But my call to action for everyone listening today is to ask yourselves: Will I be able to recruit, hire and retain the people I need to be successful next year? Will I be able to compete for the best and brightest? What about five years from now? Ten?  Twenty?

I am asking you to please step up and take a leadership role in this very important issue. We need you.

If you do, we will ALL reap the rewards. And remember: This isn’t just an issue for Mississippi or for my business or for yours.

This is a United States issue.  It’s a national security issue. And it’s something we must address today for our nation to remain strong tomorrow.

Think back to the beginning of my remarks and those ships proudly built at Ingalls—statements of national purpose—sailing the globe.

Early education for all can get us there.

I do have to end with a safe harbor statement.

She is here today. And she happens to be my wife, Nancy.  Both she and our two daughters work in the education field.

So I come by my position on education very naturally. When Nancy and I are having dinner at a local restaurant near our home in Virginia, on the walls of the restaurants are some pictures of me at various ship christenings with various U.S. presidents.

Yet the folks that we talk with while there are the ones that come up to say hello to Nancy, and these are almost always her former students, whether they are eight years old or twenty.

With that in mind, I’ll leave you with a quote from the poet Maya Angelou: “When you learn, teach. When you get, give.”

I am a strong believer in this theory.

I hope you are too.