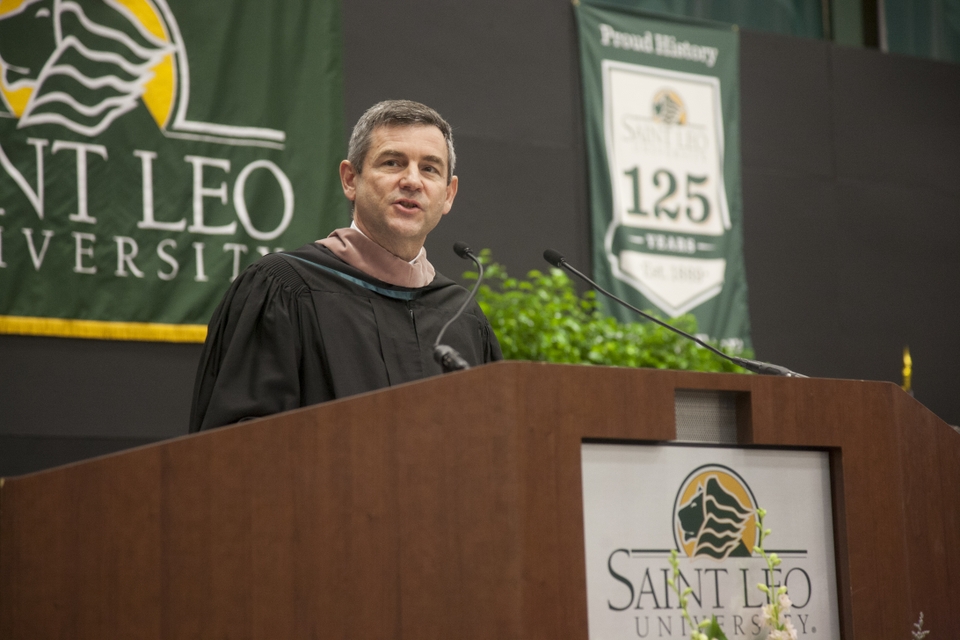 This afternoon, standing here, I think of the people I know who have stood on these very same grounds in times past, years past, generations past. I think of the priests from the Abbey, the nuns from Holy Name, and my family in St. Joe.

I have great respect for what this institution, St. Leo, and these places—in their past and present forms—have meant to so many people. And what these people and places have meant to me. Like my father, Clem Petters, who, 60 years ago, graduated on these same grounds, in a graduating class of 36 young men from St. Leo Preparatory School. And, of course, my mom, Joan Barthle Petters.

I haven’t lived here since 1977. Yet today it’s almost as if I never left. Memories about family and relationships, lessons learned—and, yes, sometimes lessons ignored—come back to me. Yet most of all, I feel fortunate. I’m fortunate to have grown up in a place and in a time that was relatively simple—and with people who cared about me and who were willing to help me build a life I couldn’t even begin to imagine. A life that led me from the orange groves of St. Joe to Jesuit High School in Tampa—from the U.S. Naval Academy to service aboard a nuclear-powered submarine. A path that led me to my wonderful wife and our having two great daughters and recently, a terrific son-in-law. And a path that led me from working as a shipbuilder to serving as a leader of 38,000 men and women who build the greatest ships in the world.

So thank you, Danny [Hunley], for that introduction. You are my colleague and my friend—and a gifted and dedicated leader—and, fortunately for me, one of the first people I met when I joined the shipyard so many years ago.

I also want to thank Dr. [Arthur] Kirk, members of the Board of Trustees and the Saint Leo University community for allowing me this opportunity—this honor—to speak for a few minutes to the graduates of St. Leo’s class of 2014.

And to the class of 2014, I congratulate you, and I thank you as well. You’ve given me a reason to slow down a bit—to pause—and remember the wonderful things about growing up here. I speak quite often to groups, and most of the time I am speaking as the CEO of a Fortune 500 company or the leader of a company that builds the most complex and capable military ships in the world. But today, and in this place, I’m speaking as Clem and Joan Petters’ oldest child. And I kind of like that. Coming here for this event and speaking to you has given me a renewed appreciation for the people who—even though I didn’t know it at the time it was happening—were truly changing my trajectory in life.

Now I know that commencement speeches are supposed to be about sharing some kind of wisdom or advice that, as new college graduates, you will magically absorb. I also know that this advice or wisdom should be designed to help inspire you to even greater things in life than what you’ve already accomplished—which is already significant. That’s no easy task. Especially when I know I am one of the last things separating you from your diploma—and, more importantly—your celebrations.

But I do want to tell you a little bit about two people I mentioned earlier—because I learned so much from them. First, my mom. She personified passion. She chose to be passionate about her family. Her children. Us. Me. Asking her about us was an invitation to hear all that we had going on, which was always more than you really had time for. I think I got that from her.

She was also passionate about education. In fact, both my mom and my dad believed that education was everything—that you should pursue it with gusto, with passion, and that you should never stop learning. Yet I have to say it was my mother who really walked the talk. She always believed in me. Even when maybe I didn’t believe in myself. For example, my entire eighth-grade year I talked about how I was going to go to Jesuit High School. But that’s all I really did—talk about it. My mom called my bluff by finding out about the entrance exam and encouraging me to take it even though she knew that we could not afford the tuition. She believed in me. And she believed that if I got in, we’d find a way to make it work. And that encouragement, that opportunity to attend Jesuit—changed my life forever.

And then there’s my dad. There are two things my dad drilled into me—and into my five siblings. The first was that you should learn something new every day. He instinctively knew that no matter how much he knew, his children would know more. And that’s what he wanted. There’s a song that is a favorite of my wife Nancy’s that speaks to this theme. The lyrics go: “I hear babies cry / I watch them grow / They’ll learn much more / Than I’ll ever know / And I think to myself / What a wonderful world.” Like my dad, I am well aware that my daughters Sarah and Caroline will know more than I know—and, in fact, they may tell you they have already reached that destination.

The second thing Dad advocated was that we are darn lucky to be born in this country, and we need to pay it back through service. In my dad’s view, the way to do that was through military service. And, as you heard earlier, the Petters kids took that to heart as all six of us served in the military, and my sister, Brigadier General Susan Davidson, who spoke at this morning’s commencement and who is better known to me as Susie, still serves. I will share with you and only you that my family knew early on that Susie was a general—it just took the Army 20-something years to figure that out. And her spouse, Redding Hobby, is someone who also exemplifies service—a West Point grad who just days ago received his 45-year pin for his dedicated years of military and civilian service to America. He fits right in with this family.

In my dad’s universe, when he graduated from St. Leo Prep 60 years ago, America was just about perfect. We had not yet entered Vietnam, and Watergate was years away. Yet look at all that has happened in America since then. Some of it bad. Yet most of it good. Just think about all of the progress America has made since 1954. In society. In business. In technology. And I’m not just talking about the iPhone.

So I agree with my dad that we are lucky to live in this country. And my reason for believing this is not that much different from his. And this, graduates, is where the advice part begins—which also means we’re closer to the end. I believe we’re lucky to live in this country because—for all that has happened in the last 60 years since dad graduated with his class—we still have that same opportunity. In fact, we have the chance to do so much more. It’s a uniquely American characteristic to believe that we—both as individuals and as a nation—can make the world a better place. It’s a uniquely American characteristic to believe that we can make things better for ourselves and, more importantly, for someone else. And yes, that “we” includes you, the St. Leo Class of 2014. You can make things better.

My advice? Build something. Yes, I said build something. Now, as you know, I build ships. My dad built orange groves and cattle farms. My sister builds transportation networks around the world. My brother Tim, who lives just down the hill with his family and who is here today, builds computer systems. But the most important things you build will not always be tangible in the physical sense of the word. My mom, with help from my dad, built a family—all of us successful in our own way. And while I, along with my team of 38,000, am building a new company, it’s the relationships I’ve built in my life that count the most. Because it’s these relationships with the people in my life—past and present—that truly changed who I was—and who I wanted to be—even if I didn’t realize it at the time. These relationships continue to enrich my life for the better.

Many of these people are in the audience today, many of them from my mom’s family, and I hope you know how much you have helped me and inspired me along the way—and how much you mean to me. So, graduates, I don’t know how many of you came from a family of six siblings or who grew up on an orange grove with your aunts and uncles and cousins living just a tractor drive away. I’m guessing it’s not too many. But where you’re from—no matter where it is—is an asset for you.

That’s what’s great about America. No matter where you are from, you can make things better. So build something. Build a bridge between someone who deserves a chance—and the chance itself. Build choices for those who believe there are none. Build dreams for those who have lost the ability to dream. Build hope for the hopeless. And acceptance for the outcast.

You will soon be graduates of a college known for tolerance and acceptance—and for building things. St. Leo built the first Catholic college in Florida. In the early 1900s, St. Leo accepted a black student amid local protests and when it was illegal to do so. It built an organization dedicated to supporting veterans returning from Vietnam when others were building organizations of protest. And St. Leo built a new path for our service members when it opened education centers for 176 students in Highlands County, Florida, and for 13 more at MacDill Air Force Base in Tampa in 1974.

Today, I see St. Leo grads everywhere. And the building continues—and, in fact—ground was broken just yesterday for a new building.Now, ladies and gentlemen—St. Leo diploma in hand—it’s your turn to build. As my dad would say, it’s your turn to serve, and your choices for doing so are far more numerous than those open to the Petters kids so many years ago. And this Petters kid—although not so much a kid any longer—is suggesting to you that no matter what you do next or where you go, you have the unique American opportunity to make things better for someone else. So congratulations to you on your wonderful achievement, and best wishes to you for a wonderful future. And finally, remember that a life that’s only about you is a small life indeed. So go out—and build a big life!