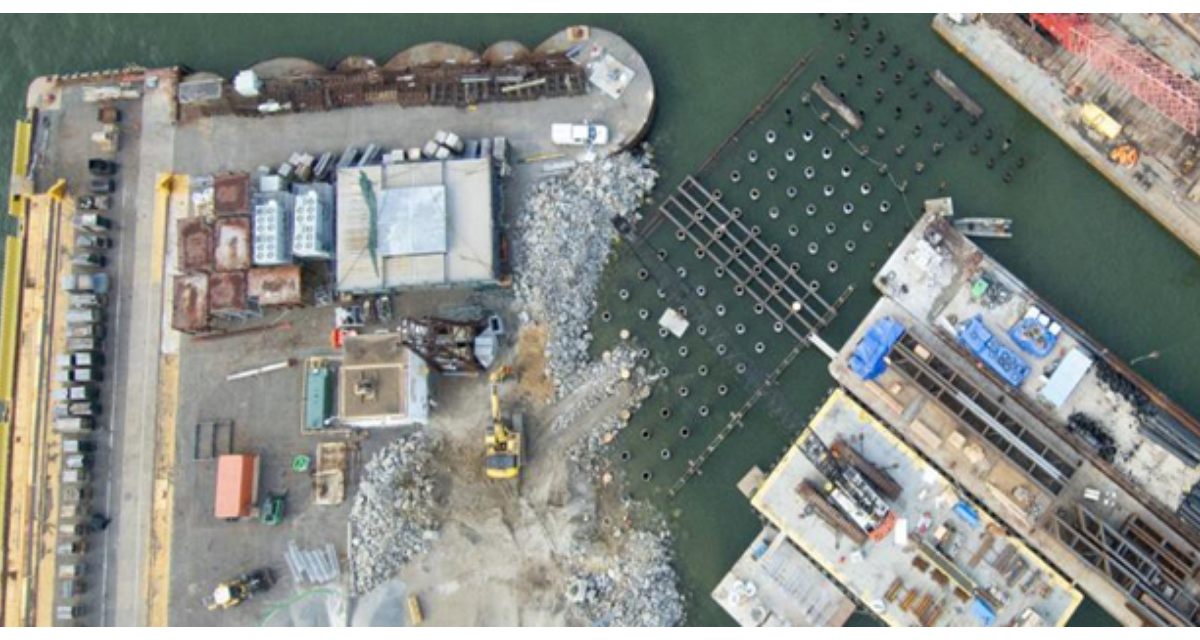 At HII's Newport News Shipbuilding division, a new pier now under construction in the North Yard will be a crucial piece in the Columbia-Class Submarine Program, where Newport News plays a major supporting role. Construction began about a year ago on the pier, which is just north of Dry Dock 12. It will allow NNS to load Columbia submarine modules onto a barge for transport to General Dynamics Electric Boat, the prime contractor for the program. But that simple description doesn’t do justice to the complexity and breadth of this project. It’s been a rewarding experience for Aaron T. Kenny, the O41 facilities engineer overseeing the work. “We’re building the largest modules we’ve ever shipped out, and we’re utilizing a whole new design for something to carry these modules,” he said. “The engineering being done is amazing.” The new pier will accommodate an Electric Boat barge that is nearly 400 feet long, big enough to carry modules for what will be the Navy’s largest-ever submarine.

Once assembled, Columbia-class submarines will be slightly longer than the Washington Monument is tall. The barge will not use typical mooring lines to remain at the pier. As Kenny explained, the barge has two transom arms that will lock the barge into place. A pair of pins embedded in the pier will work in concert with the transom arms. The modules will be moved from the Joint Manufacturing Assembly Facility (JMAF), transported down 65th Street and carefully rolled on the barge, which has a series of ballast tanks for stability and proper weight distribution. That entire process will take a full day, Kenny said. Columbia-class submarines are a priority for the Navy.

They will replace the aging Ohio-class submarines as the most survivable leg of the U.S. nuclear deterrent. The program is high profile, and NNS’ new pier is gradually getting attention, too. The pier work is one of several expansion projects taking place at NNS. Its construction can be seen when crossing the James River Bridge, and Kenny said they regularly get questions about the pier. “We get a lot of people taking a look at it,” he said. “It is definitely fascinating to be a part of the Columbia program and getting those modules up to our partners at Electric Boat.”

You can find more on this project and other news from Newport News Shipbuilding in this week's Currents.